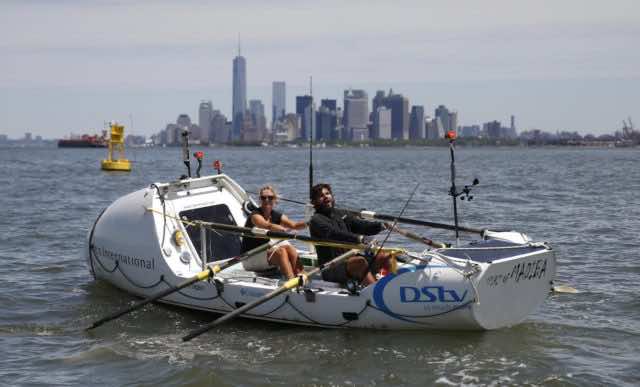 New Jersey airplane mechanic, Peter Morales, was just looking for a few hours of escape Wednesday afternoon, when he set out in his boat for a spot of fishing and some Coors Light. Then he spotted an unusual sight. It wasn’t the couple who took him by surprise, it was the kayak they were rowing, named “The Spirit of Madiba,” after Nelson Mandela.

“It completely took me off my feet,” said Mr. Morales. In fact, the custom-built 23-foot long kayak had been specially designed for Riaan Manser and his fiancée, Vasti Geldenhuys, for their once-in-a-lifetime journey from the coast of Morocco to New York’s Manhattan. Anyone looking at it would call the design space-age.

The couple manning the oars looked tired and thirsty so Morales offered them each a beer and some water and ice from his supply, which they accepted gratefully. They handed him a business card identifying themselves as citizens of South Africa and invited him to join them at the 79th Street Boat Basin on Friday to watch them cross the finish line.

The South African couple’s record-breaking journey began December 30th on the Atlantic coast of Morocco. Manser is no stranger to adventure, having cycled the entire perimeter of the Africa continent and circumnavigated Madagascar by kayak. 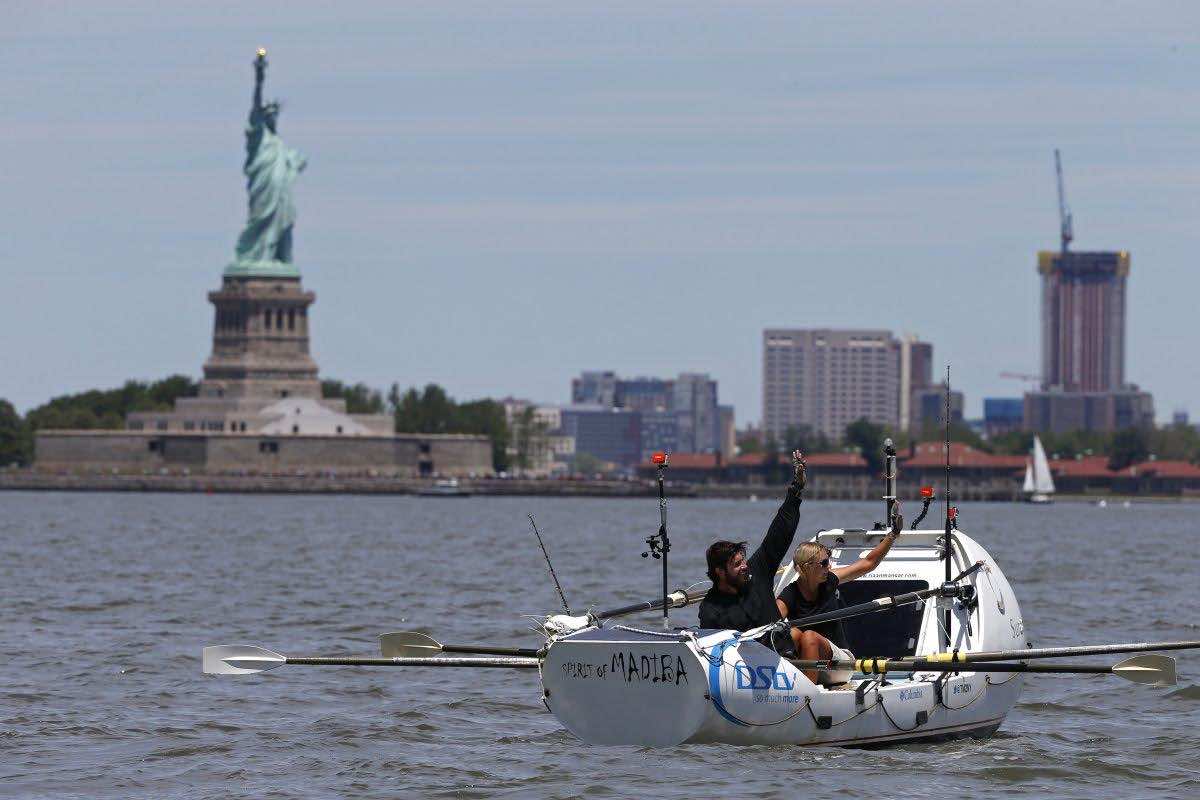 He is usually a lone adventurer but decided to invite his fiancée, Geldenhuys, with him on this occasion. In total, the couple spent 133 days on the water. 74 of those days were passed with no land visible in ay direction. After 1.8 million oar strokes, the couple piloted their kayak safely into Manhattan where throngs of press greeted them. True to his word, Peter Morales was also there.

“We’ve done a journey that no human beings have done,” Manser told The Times. “Our behinds are very, very sore,” he added. Equally exhausted, Geldenhuys announced “Yes, we’ve had enough of the ocean.” They weren’t too excited to celebrate, however, sharing well-earned embraces.

Asked about the overall experience and how it measured up to their pre-launch impressions, Maser said, “We were naïve. We thought the Atlantic would be this calm little pond that you just row across. By the fifth day, we were saying to each other, what is going on? Goodness gracious. It should be a lot calmer. The sea was very, very, very angry.”

Despite their self-described naivety, however, there was reason to be proud. “We went one step further than Christopher Columbus,” declared Manser. “That guy stopped in San Salvador and we went all the way to New York!”