Rabat - Six people have been injured, including three children who have been referred to hospital, after a car ploughed into a group of Muslims leaving Eid prayers outside a sports center in the northern English city of Newcastle on Sunday morning. 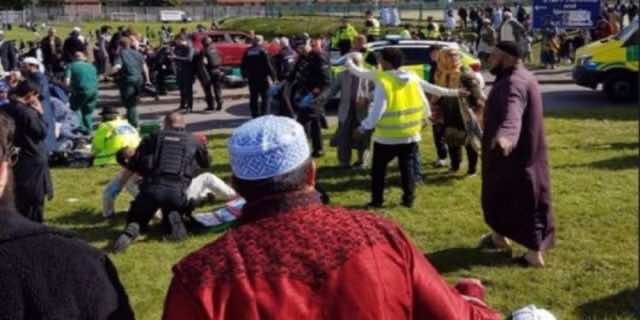 Rabat – Six people have been injured, including three children who have been referred to hospital, after a car ploughed into a group of Muslims leaving Eid prayers outside a sports center in the northern English city of Newcastle on Sunday morning.

The incident comes just a few days after a terrorist attack that targeted Muslims outside the Finsbury Park Mosque in London.

Northumberland police said that it “is not believed to be a terror incident,” adding that they have arrested a 42-year-old woman, who has been placed in custody. The woman is claiming to have lost control of her car.

The Newcastle Central Mosque issued a statement saying that the incident occurred as people began to leave the mosque, adding that “the injured were immediately attended to by the emergency medical services and the police.”

“We pray and hope that all those affected recover soon fully. We thank the emergency medical services, the police and over 100 volunteers from the mosque for their quick response to the incident.”

“The police are investigating the incident at the moment and we will give an update as soon as we have more information,” it added.

The man has been arrested on suspicion of murder and has been taken to hospital “as a precaution.”

This story is being updated, more information will be provided shortly. Please refresh the page for the fullest version Muslims Prepare for Eid Al-Fitr Across the Globe