Toronto - A new report authored by the Investigative Fund, in partnership with news outlet Reveal, from the Centre of Investigative Reporting, has found the majority of terrorist incidents occurring in the US from 2008 until 2016, were committed by right-wing perpetrators. 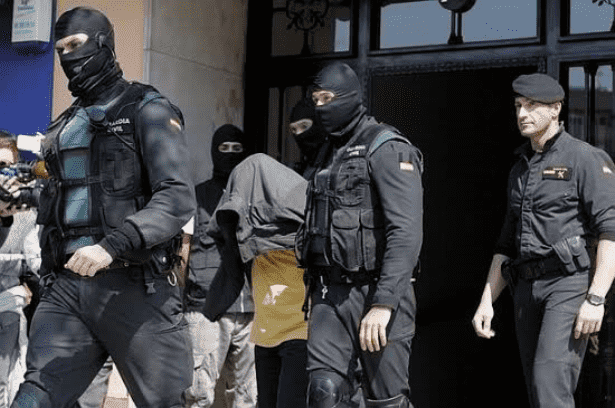 By
Constance Renton
-
Constance graduated from the Television and Radio Broadcasting Program at Canadore College in 1983.
Jun 25, 2017
Spread the love

Toronto – A new report authored by the Investigative Fund, in partnership with news outlet Reveal, from the Centre of Investigative Reporting, has found the majority of terrorist incidents occurring in the US from 2008 until 2016, were committed by right-wing perpetrators. 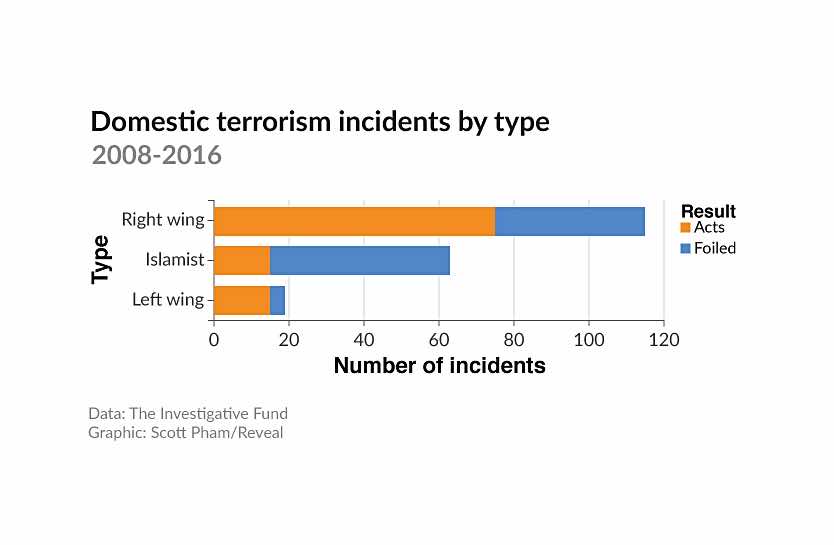 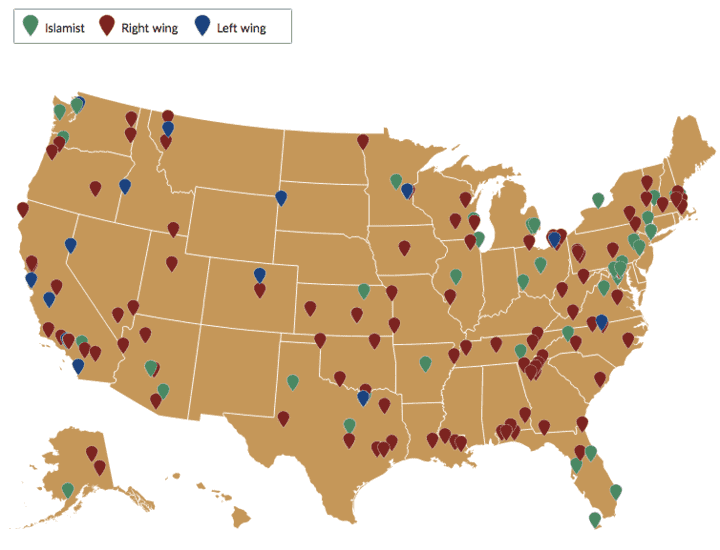 Of the 201 terror-related incidents examined by the report, 63 were found to have been motivated by so-called “theocratic political ideology espoused by such groups as the Islamic State.” Meanwhile, 115 were committed by right-wing, white supremacist extremists.

Curiously, police anti-terror squads have successfully headed off 76 percent of the planned Islamist threats but only 35 percent of those organized and carried out by right and left-wing extremists. Even the use of sting operations is heavily biased, with Muslims subject to the technique at four times the rate used in the investigation of so-called homegrown terror plots.

The US court system was also found by the report to be biased in its dealings with Muslims, as both perpetrators and victims. “Muslims, it seems, are taken quite seriously as potential perpetrators, but far less so as victims,” the report said.

Much of US President Donald Trumps presidential campaign was predicated on the eradication of “radical Islamic terrorism.” It is not surprising, according to the report, that right-wing groups have flourished since his election to the White Office.

Stanford law professor, Shirin Sinnar, warns that “the administration’s anti-Muslim and anti-immigrant rhetoric and policies can fuel white supremacist violence directed at Muslims, immigrants, or people of colour by legitimising such hate.”

Interestingly, while visiting Saudi Arabia in May, Trump inaugurated a new centre for combatting the financing of terrorist groups in the region. Ironically, 15 of the 19 terrorists involved in the 9/11 attack hailed from Saudi Arabia.

The Consequences of Ignoring Right-Wing Terror

Perhaps the clearest indication of the very real problem right-wing terror has become is the fact that 87 percent of terrorist “perpetrators or alleged perpetrators” are US-born, not citizens of Trump’s travel ban countries.

According to John Carlin, former US Assistant Attorney General, attacks have been planned on “government buildings, businesses, synagogues…stockpiling of illegal weapons, explosive biological and chemical weapons and killing sprees,” by white supremacists.

Asked about the process by which right and left-wing terrorists become radicalized, Carling explained that “Just like with international terrorism…you see people being radicalised, where they go from someone with a series of beliefs to someone who’s willing to kill in the name of those beliefs.”

For Sinnar, there is real peril in ignoring the growing spectre of home-grown terror in the US. Not shining a very bright light on the issue, combined with the Trump administration’s blatant bias against Muslims, enables these groups togrow and strengthen, she says.

The Stanford professor considers it naïve to believe that any information in this report or any other similar study will alter the course of the Trump administration’s rhetoric, saying “Its approach to security has less to do with facts than with racialised fears.”