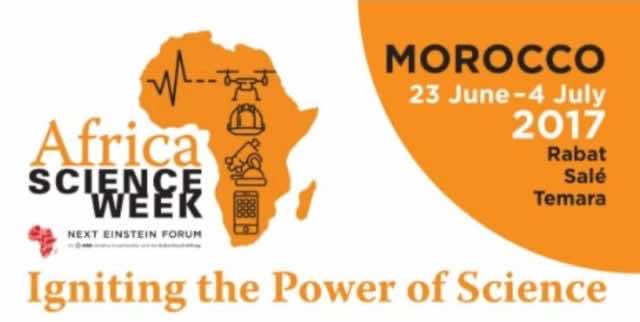 Rabat – The Next Einstein Forum, an initiative of the African Institute for Mathematical Sciences, in partnership with Robert Bosch Stiftung, announced the launch of NEF African Science Week from June 23 through July 4 in Rabat.

The event , which is led by NEF Ambassador and social scientist, Abdeslam Badre in Pretoria and Limpopo, Morocco, is financially supported by Johnson & Johnson Innovation and Google, as well as local sponsors. Africa Science Week is designed to help youth to  develop their scientific or technological skills

Thierry Zomahoun, AIMS President/CEO and NEF Chair said, “Our primary objective is to develop tomorrow’s scientists and technologists by engaging children and young people in scientific activities like science caravans and hackathons.”

Since this is the first event held in Africa preceding 13 counties, Africa Science Week in Morocco will host sessions enabling students to get excited about learning of Chemistry, Technology and Engineering via the use of interactive science kits.

The event will culminate in an award ceremony  and the students will also have opportunities to participate in physical activities and science competitions.

“We would like to thank our partners in the public, academic and private sector for supporting this initiative. Africa will only compete globally if there are coordinated sustainable investments in building the pipeline of researchers and innovators,” said Mr. Zomahoun.

In addition to its geographical expansion plan, the NEF hopes to see the activities shared during Africa Science Week incorporated into schools and universities, feeling that this could potentially lead to solid integration between the research community and the private sector.

Adhering to the NEF’s Dakar Declaration, Africa Science Week will place important emphasis on public engagement, thereby advancing Africa’s scientific agenda. The upcoming edition of the NEF Global Gathering will take place in Kigali in March 2018 under the patronage of the President of Rwanda, H.E. Paul Kagame.