Rabat - As his congratulatory messages to Muslims at the onset of every religious feast have become habit, Canadian Prime Minister, Justin Trudeau, has once again taken to his Facebook page to wish Muslims around the world a joyous Eid al-Fitr. 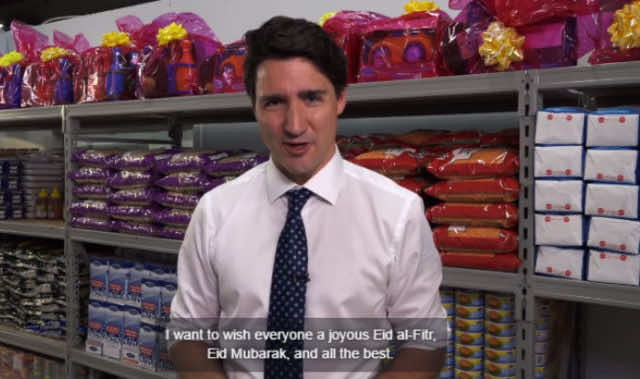 Rabat – As his congratulatory messages to Muslims at the onset of every religious feast have become habit, Canadian Prime Minister, Justin Trudeau, has once again taken to his Facebook page to wish Muslims around the world a joyous Eid al-Fitr.

In the nearly one-minute long Facebook video, Trudeau appears surrounded by a group of young people packing food products to be sent to poor Muslims in Canada so that they might share in the celebration of Eid al-Fitr, which marks the end of the holy month of Ramadan.

“There is nothing more Canadian than helping out your neighbors,” Trudeau said in the video, captioning it as follows: “Happy Eid al-Fitr! The community spirit I felt at Ramadan food banks in Montreal and Toronto reminds us all – no matter our backgrounds, we’re in this together.”

The video has received major attention. Followers of Trudeau have expressed their admiration for his positions in respecting all residents in Canada, regardless of their religion.

A comment from one of them reads, “Trudeau a man who doesn’t fear Muslims and sees them as humans. A man who respects the meaning of culture. A man who doesn’t tolerate hate and ignorance. Love your neighbors like you love yourself. Trudeau has brought back the age of heroes.”

In honor of the occasion, Trudeau released a statement Saturday, wishing the Muslim of community of Canada “Happy Aid,” highlighting that it is one of “most important religious holidays” for them.

“Tonight at sunset, Muslims in Canada and around the world will celebrate Eid al-Fitr, also known as the festival of breaking of the fast,” he said. “Eid al-Fitr […] marks the end of the Islamic holy month of Ramadan. It is a time to give thanks for the spiritual growth and the blessings received throughout the holy month.”

“Canada’s cultural diversity is one of our greatest strengths and sources of pride,” he said.