Rabat - Notwithstanding the blockade imposed on Qatar by Saudi Arabia-led alliances, King Mohammed VI has congratulated the Emir of Qatar, Sheikh Tamim bin Hamad Al Thani, on the fourth anniversary of his accession to power, a move highlighting the importance to Morocco of consolidating the bilateral ties between Morocco and the member countries of the Gulf Cooperation Council (GCC). 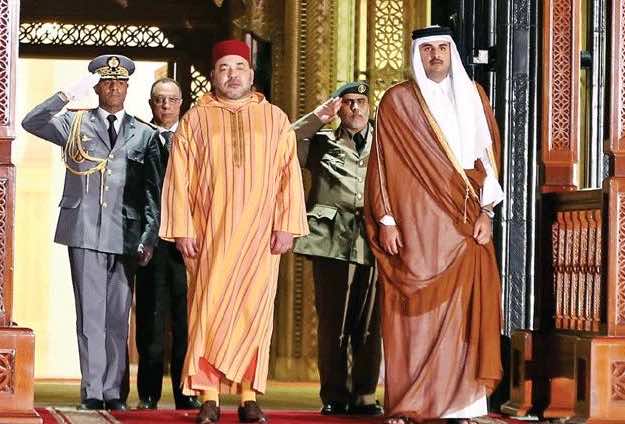 Rabat – Notwithstanding the blockade imposed on Qatar by Saudi Arabia-led alliances, King Mohammed VI has congratulated the Emir of Qatar, Sheikh Tamim bin Hamad Al Thani, on the fourth anniversary of his accession to power, a move highlighting the importance to Morocco of consolidating the bilateral ties between Morocco and the member countries of the Gulf Cooperation Council (GCC).

King Mohammed VI expressed his sincere congratulations and his sincere wishes to the Emir of Qatar, his family, and Qatari people, for good health and prosperity, in a statement obtained by Moroccan news agency Maghreb Agence Presse.

“I would like to express my pride in the brotherly friendship and mutual appreciation that brings us together and our families, and the fruitful cooperation and solidarity between our two countries,” said King Mohammed VI.

The King emphasized the importance of maintaining continuing bilateral cooperation between Rabat and Doha in line with the strategic partnership between Morocco and the member countries of the GCC, to achieve the aspirations of the countries’ people “for greater synergy and mutual benefit.”

The diplomatic gulf crisis broke out after the decision by Saudi Arabia, Bahrain, the United Arab Emirates, Egypt, Yemen and Libya, and the Maldives in the early hours of Monday, June 4 to sever their ties with Qatar over its alleged “support of terrorism.”

Morocco announced on Sunday, June 11 its “neutrality” towards the issue in order not to “confine it to passive observation of a disturbing escalation between brotherly countries.”

Morocco offered to mediate a solution between the Gulf countries, saying that it “was ready to offer its good offices with a view to promote a frank and comprehensive dialogue on the basis of no-interference in internal affairs and the fight against religious extremism.”

The Kingdom added that it was strongly tied to the Gulf countries in all areas despite the geographical distance between them, and was seriously concerned by the crisis, even though Morocco was not directly involved.

The Moroccan Ministry of Foreign Affairs announced in a statement that King Mohammed has established extensive and permanent talks with various parties to the dispute since the deterioration of diplomatic ties between the countries and Qatar.

In furtherance of the offer of mediation, and signaling Morocco’s independent brand of foreign policy, the King sent the Minister of Foreign Affairs to visit Saudi Arabia, UAE, and Kuwait.