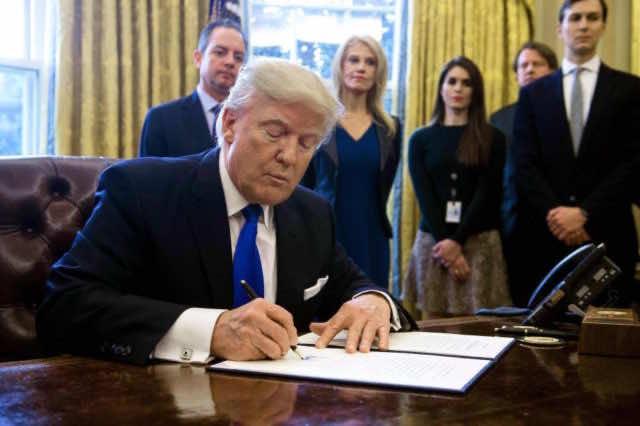 Rabat – A survey by the Pew Research Center reported by Reuters demonstrates that the United States’ international reputation has been seriously injured since Donald Trump took office as president in January, due to his jingoistic policies and “arrogant” leading style.

The survey, conducted in spring 2017 spanning 37 countries, shows the US’ favorability ratings in the rest of the world dropping to 49 percent, down from 64 percent at the end of Barack Obama’s eight years in the White House.

This plummeting approval rate is especially significant among the US’ closest allies such as neighboring Mexico (30 percent) and Canada (43 percent), as well as European partners such as Germany (35 percent).

Trump’s promise to put “America First” has been shown in various statements and decisions such as to build a wall between the U.S. and Mexico, which got widespread disapproval (76 percent of respondents in the survey), to withdraw from major trade agreements (72 percent), and to restrict travel from some major Muslim countries (62 percent).

These “America First” moves have caused some upheaval among many governmental leaders and citizens in various countries, and majority of respondents in the survey described Trump as “arrogant,” “intolerant,” or “dangerous.”

Chancellor Angela Merkel received the highest confidence rating of 42 percent, among four leaders asked about in the survey.

As of Trump, he ranks the lowest  (22 percent) among these four world leaders for confidence in his ability to manage world affairs.

When it comes to nations that showed most unfavorable views of Trump, Mexico and Spain rank the highest at 5 percent and 7 percent respectively.

On the bright side, the survey also stated 58 percent of respondents had a positive view of the US in general, and they “expected relations with the United States” to be almost the same despite the Trump’s administration.