Rabat - A Saudi writer has made an outrageous call for the assassination of Emir of Qatar Sheikh Tamim. 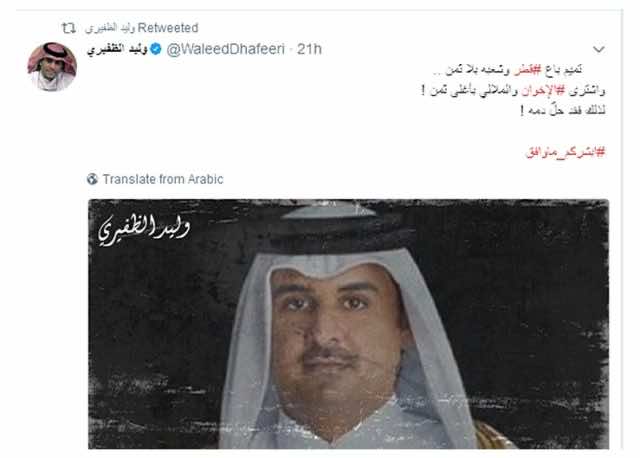 Rabat – A Saudi writer has made an outrageous call for the assassination of Emir of Qatar Sheikh Tamim.

Waleed Dhafeeri, a Saudi writer know? for his anti-Qatar tweets throughout the current crisis between Doha and other Gulf capitals, tweeted on Saturday calling for the murder of Sheikh Tamim. 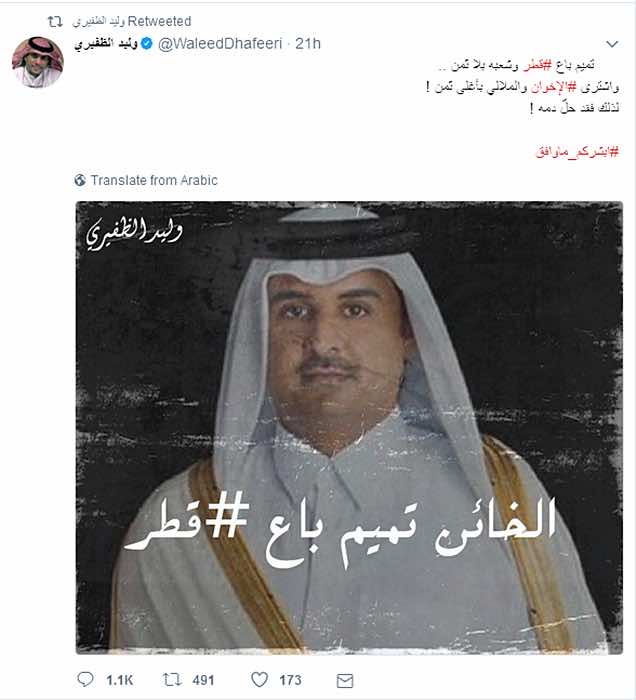 “Tamim sold out Qatar and its people for free, and instead bought up the Muslim Brotherhood and Mullahs with expensive prices. This is why, it’s legal to spill his blood”, reads his tweet.

The tweet is one example of a massive campaign against Qatar on social, print, broadcast and online media in countries that currently boycott Qatar.

Among the groups accused of terrorism which Qatar supports feature Islamist organizations formerly backed by those countries, including the Muslim Brotherhood in Egypt and Hamas in Gaza strip.

Cutting diplomatic ties and launching a media campaign against Qatar by Saudi, UAE and Egyptian funded media were accompanied an economic embargo and closing  land, air and sea passage to all vessels and vehicles coming from or going to Qatar.

In addition to that, visiting or resident nationals of the boycotting countries in Qatar were ordered to return, while Qatari citizens in these countries were ordered to leave as well. The decision came for many Gulf mixed families finding themselves torn apart.

The move, which was taken during the holy month of Ramadan, was unprecedented.

So is unprecedented the call for the murder of the leader of a Gulf country from a national of another GCC nation.

Dhafeeri’ shocking tweet is but one among many outrageous ones, where he accuses Emir Tamim of “terrorism” and calls for toppling him.

“Saudi Arabi and UEA are against any terrorist movement and who he finances it. What it is left is putting Tamim on terrorism list”, reads another of his tweets.

As the media campaign against Qatar intensifies, many are wondering about the outcome of the crisis whose implications are not just diplomatic and economic, but also human.