Rabat - King Mohammed VI called for a “youth-oriented” policy, noting “the future of Africa hinges on its youth,” at the 29th Summit of Heads of State and Government of the African Union (AU) in Addis Ababa, Ethiopia, on Monday. 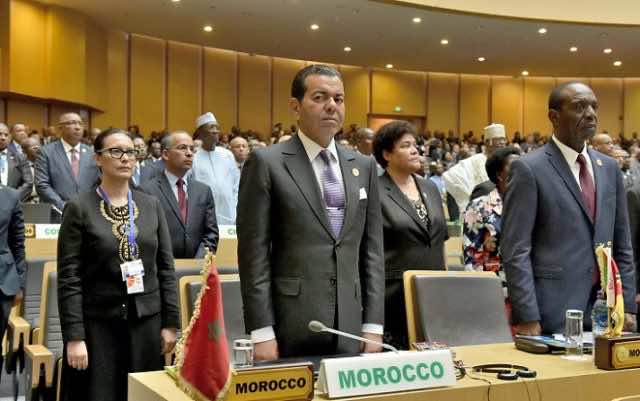 By
Chloe Koura
-
Chloé Koura is a final-year student of Arabic and Latin at the University of St Andrews.
Jul 3, 2017
Spread the love

Rabat – King Mohammed VI called for a “youth-oriented” policy, noting “the future of Africa hinges on its youth,” at the 29th Summit of Heads of State and Government of the African Union (AU) in Addis Ababa, Ethiopia, on Monday.

In a speech delivered by Prince Moulay Rachid, who represents the King at the Summit, the King stated “a proactive, youth-oriented policy” was needed to “channel energy for the achievement of development.” He continued that it was essential to take advantage of the continent’s demographic of a young, educated and “abundant” labor force, noting it could boost Africa’s economic growth.

He continued that while over 11 million young Africans enter the labor market each year, only three million jobs are created. As a consequence, 70 percent of young Africans live on less than USD 2 per day.

To solve this problem, the King said there should be “substantial, sustained and judicious investment” in sectors including: health, education, vocational training and employment. He continued that a “proactive policy” must be undertaken to ensure education, higher education and vocational training of the highest quality.

However, money is not enough to resolve the issues and the King called for suitable training and well-regulated integration into the job market in order to advance Africa’s progress and development.

Noting that almost two-thirds of the continent’s population are young, the King warned that “idle African youths will hamper the continent’s much-desired emergence.” He said the problem should be confronted immediately because negligence in doing so would compound youths’ idleness, consequently “reinforcing their vulnerability” as well as the risk of radicalization.

The Sovereign stated that almost 40 percent of unemployed people were “ideal” candidates for the rebel movements or extremist groups present across Africa.

“Africa must resolutely look to the future and rely mostly on its own means. We owe this to our peoples. We owe it to our youths.”