Rabat – At the packed main stages of Essaouira’s Gnaoua and World Music Festival, internationally renowned artists perform blues and jazz alongside Gnaoua masters. But in the medina’s tight corridors, street musicians play intimate shows for whoever passes by. 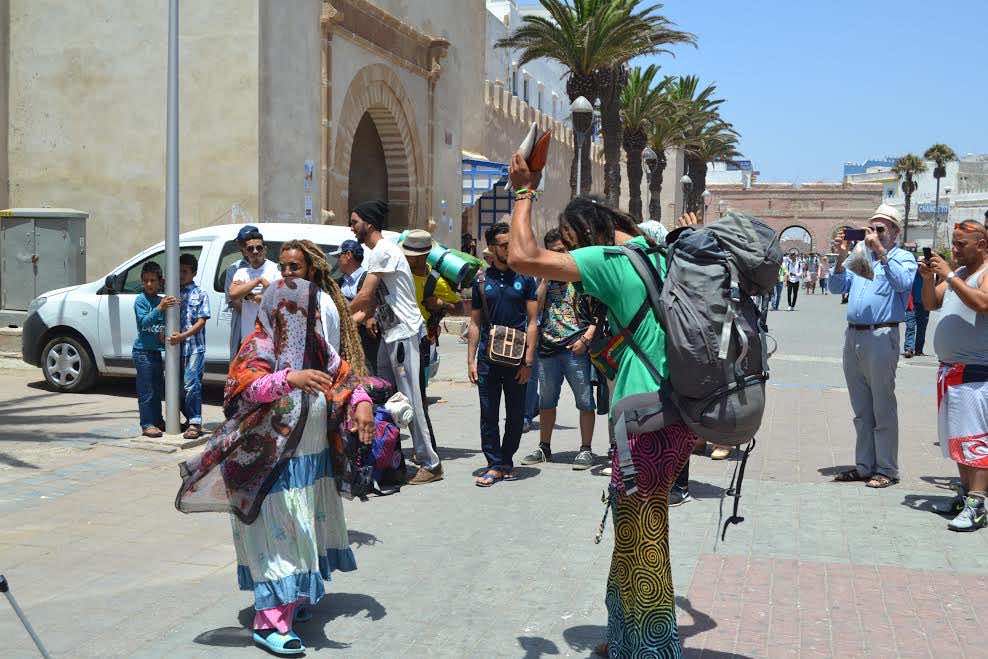 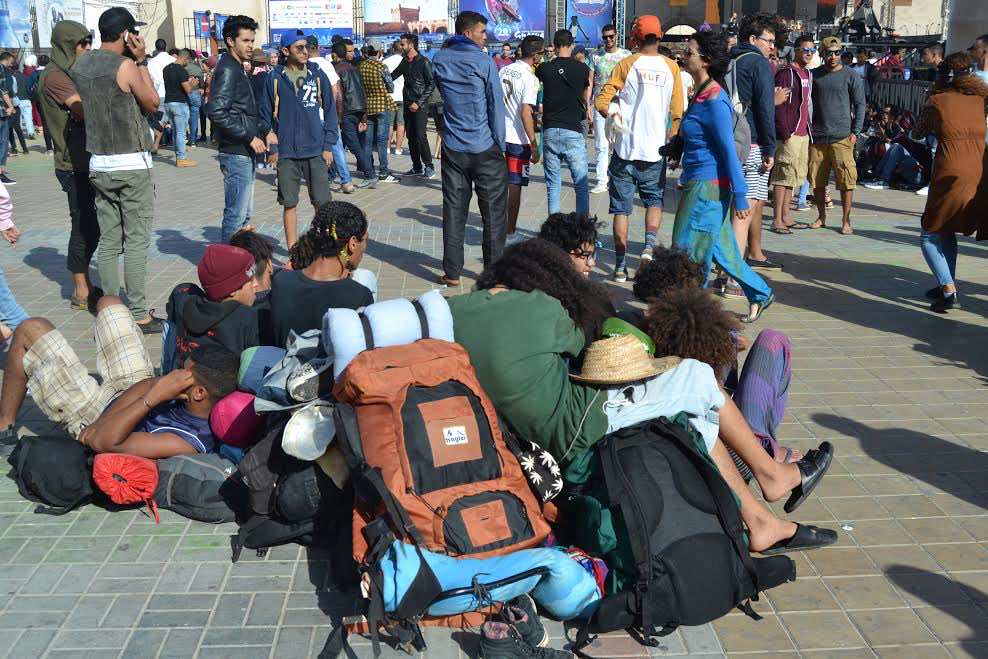 The Gnaoua people practice a spiritual version of Islam and their music is mystically inspired. The music is not only about joy and happiness, buttells a story of suffering and endurance. The Sub-Saharan ethnic group of the Gnaoua originates from countries such as Mali and Senegal, were brought to Morocco as slaves in the 17thcentury. During their journey to Morocco they were trafficked under inhumane circumstances, and Gnaoua music helped lift their spirits and cope with suffering.

Authentic stories and small narratives of endurance can be found in the small alleys and side streets off the main stages of the Gnaoua festival. 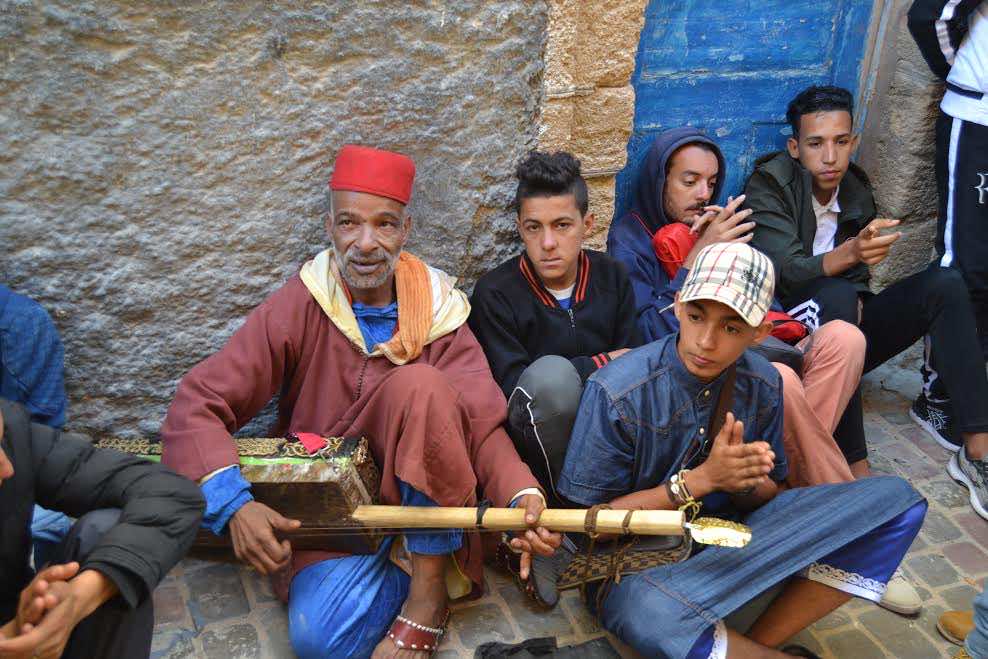 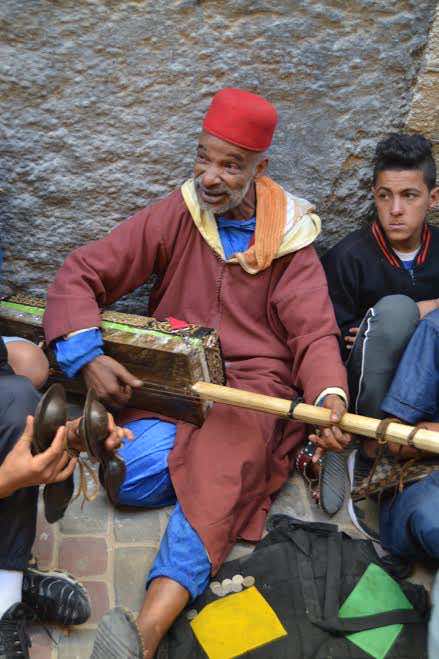 In one corner of a narrow, crooked alleyin the old city sits an old man on the ground. He plays the traditional three-stringed bass lute, called aguembri. He wears a dark-red jellaba and a red hat. He sings old traditional verses in a loud voice to the play of the guembri. He is surrounded by a group of young men, most of them still teenagers, who join in his singing. They are taken in by the music, none of them smiling.  Some of them play the rhythm on ironhand drums called qraqeb. This is supposed to be a moment filled with happiness and music, but when the man looks up while he is playing, his eyes are filled with melancholy, maybe even a hint of anger.

This scene is very different than it seems. It is not only the love for music that brought the old man to the street, but the need toprofit from the high number of festival visitors to make a little money. He is playing the traditional music of his people and shares part of his identity with a group of people who are just passing by, the majority of them not trying to understand what it really means. 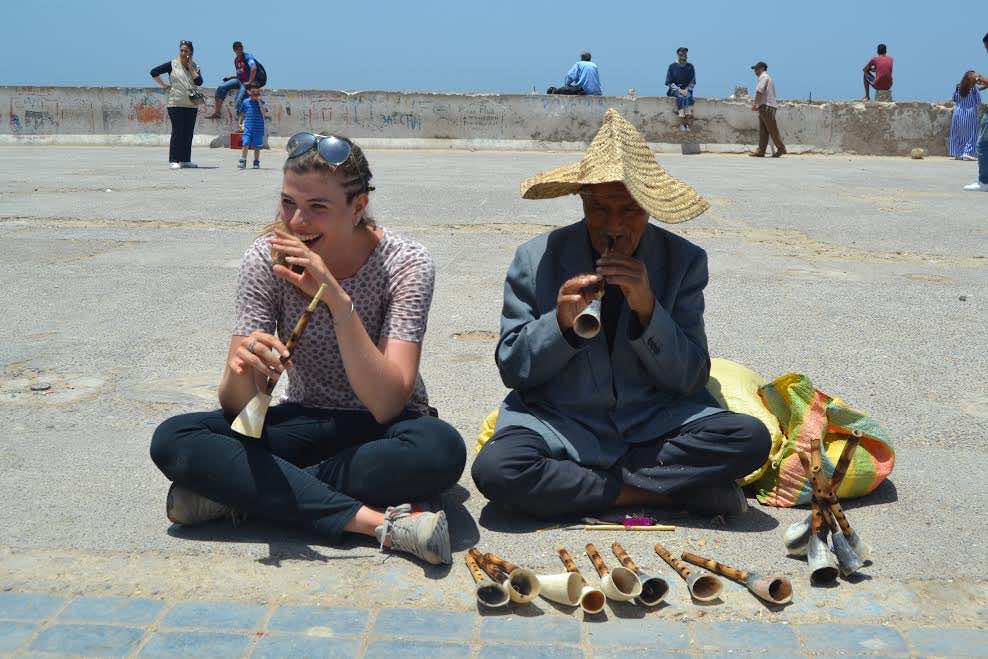 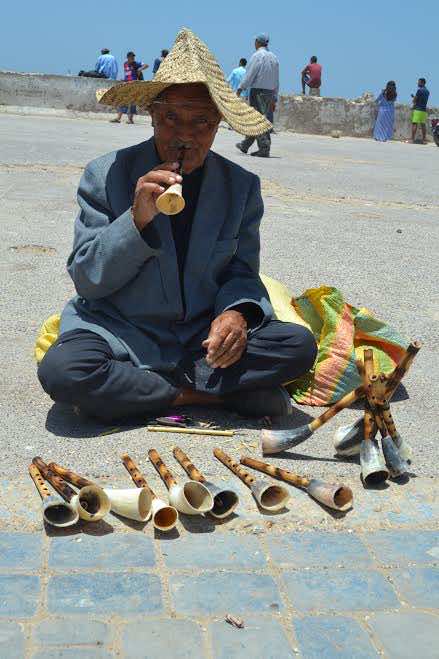 Another man is sitting in the square near the main stage under the burning sun. He wears a big straw hat, and you can barely see his blue eyes. In front of him is a selection of hand-made flutes, called Zowata, which he is trying to sell.  He holds one of his flutes in his hands and occasionally plays a few tones. The blue jacket and pants he wears are used and dirty from the dust on the street. He might share some of the feelings with the guembri player: a feeling of alienation, as he sellsa piece of his culture to strangers who are just passing by. A little girl in a dress walks over to him, stops in front of him and examines the flutes curiously. He plays a high tone, and she laughs.. A smile flits over the old man’s face: his music can still create happiness.

One square away plays a group of young guys from Rabat. They do not play traditional music, but a modern song in Darija based on bass guitars. They wear t-shirts and shorts, and around their necks are dream-catcher necklaces, which they are also trying to sell. They play well, though they seem tired and might have stayed up late the night before. People have gathered in a circle around them to listen to their song. In the middle of the circle dances a middle-aged Moroccan woman. She is wearing a long dress with pink sweat pants underneath.The slippers on her feet indicate that she might just have left her house spontaneously to come down to the square to dance. She is waving her flower-patterned scarf around in the air as she turnsto the rhythm of the music. Her dancing has a spiritual element, as she seems to have lost all connection to the present and does not pay attention to what is happening around her. 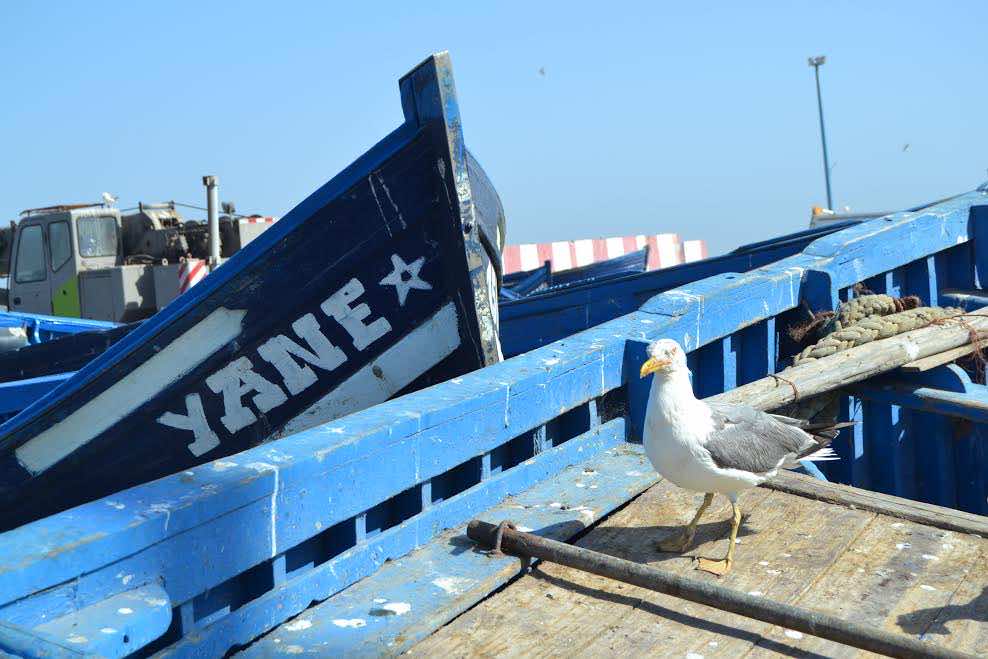 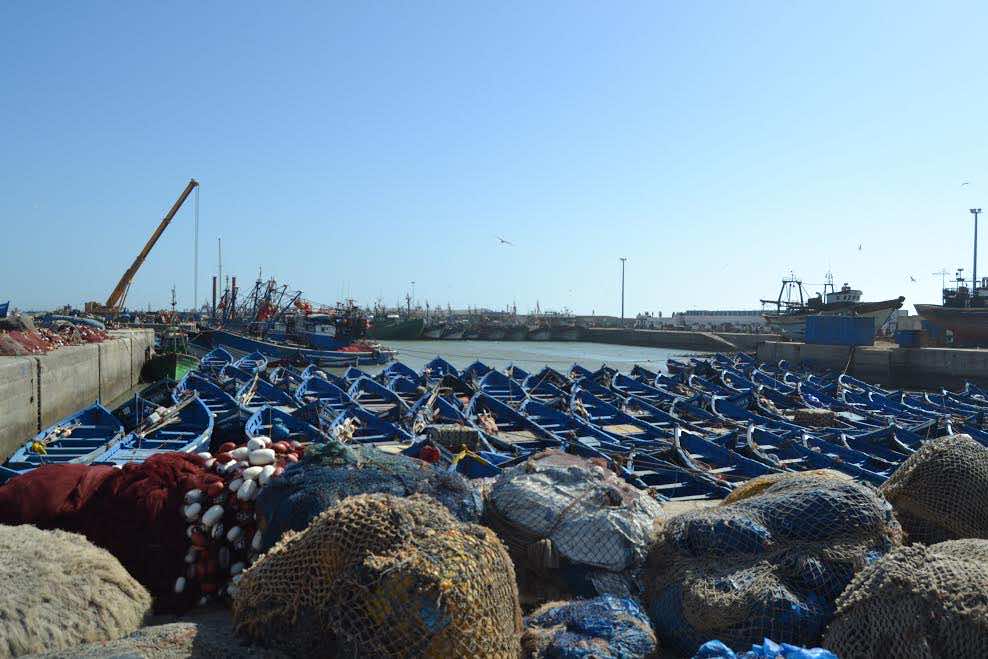 When they play a more up beat song she even takes off her hijab and waves her hair around in circles. Two Rastafarians with tattoos, colourful pants, shirts,and big backpacks who walk by, hear the music and interrupt their journey to jump into the circle to dance with her for a few minutes before they continue their way. 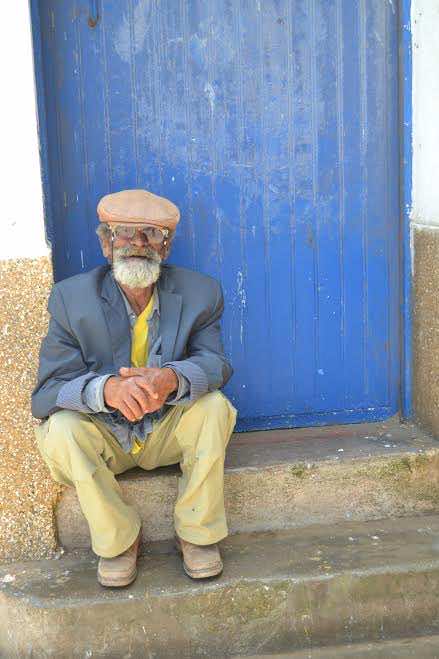 In Essouira the spirit of Gnaoua is in the air. It is music of joy and happiness and it draws smiles on faces. As it did in the past, it still has the power to connect people and allows those who listen to leave life’s realities for a while and indulge in spirituality. However, as it also lies in its history and origin, it is not only about joy. The music also tells stories of injustice and hard patches of life and it helps cope with them. Some of these stories can still be found off the spotlight in the side streets. 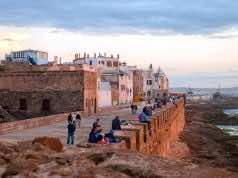 ‘Expats’ in Essaouira: a Help or a Hindrance