Rabat - A video shared on social media has shown a Muslim man being stopped, handcuffed, and searched on his way to Jummah prayers at London’s Regents Park Mosque on Friday for wearing too many clothes. 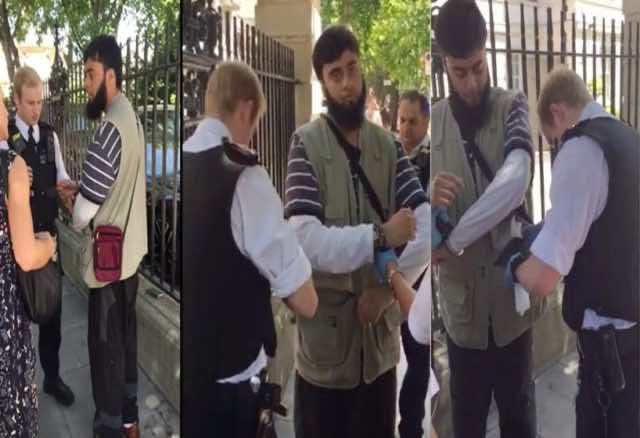 Rabat – A video shared on social media has shown a Muslim man being stopped, handcuffed, and searched on his way to Jummah prayers at London’s Regents Park Mosque on Friday for wearing too many clothes.

A statement by the unnamed man to DOAM (Documenting Oppression Against Muslims) after the incident relayed what had happened, claiming the woman who made the call against him was an undercover police officer:

“I was rushing to JummahSalat and, when I was near the Masjid all of a sudden the police come and put hand cuffs on me, the women the undercover police officer said I was wearing too many clothes on, but I was on wear two layers of clothes and the police falsely accused me of carrying a weapon and so on and so forth they searched me and found nothing as usual and then they took my date of birth address and name and they let me go.”

The video of the innocent Muslim being handcuffed and searched by police has garnered over 3.6 million views and over 7,800 comments. Many viewers have condemned the racial profiling and praised the man’s patience, while others have said the stop-and-search was fair and blamed the man’s fashion choice, saying the jacket he was wearing is mostly used for “wrong purposes” and should be avoided.

The call against the man’s “suspicious” clothing highlights what experts have identified as a recent escalation of Islamophobia and police profiling of Muslims in the UK.

Following the London Bridge attack on June 3, the number of Islamophobic hate crimes has jumped five times in London, even despite the city’s mayor Sadiq Khan announcing a “zero-tolerance approach” to hate crimes in the city.

Attacks on Muslims had already started increasing after the Manchester Arena bombing on May 22. Alongside an arsonist attack on a mosque in Oldham, Mohammed Ullah, a Muslim chaplain at University of Manchester told The Guardian that he had heard reports of a Muslim girl being spat at and another Muslim person being told to “go home.”

Dr Ghayasuddin Siddiqui, an expert on Islamic fundamentalism and trustee at the Muslim Institute, told the British National Council for Civil Liberties that Muslims were “one of the most marginalized and criminalized communities in Britain.”

“By extending the provision of internment to British nationals on the base of mere suspicion by intelligence agencies or the police will be seen by the community as a war on Islam not a war on terror.”

Islamophobia is present in the wider ‘western’ world, and the travel ban placed on six predominantly Muslim countries by United States President Donald Trump has been seen by many as a political attackon Muslims.

Trump’s travel ban on Iran, Libya, Somalia, Sudan, Syria and Yemen nationals was put in place last week, despite federal courts calling it “unfounded”. Entry will be refused to citizens of these countries who do not have “a credible claim of a bona fide relationship” to the US, despite a Cato Institute study finding that people from these six countries had “killed zero Americans in terrorist attacks on U.S. soil between 1975 and the end of 2015.”