Rabat - Moroccan economic growth will reach 4.8 percent in 2017, mainly due to a “vigorous” increase in agricultural activities, says Nicolas Blancher, head of the consultative mission of the International Monetary Fund (IMF). 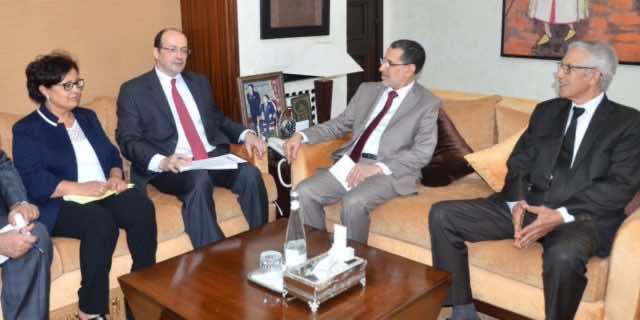 By
Chaima Lahsini
-
Chaima Lahsini is freelance journalist and activist with the Al-Fam collective in Rabat.
Jul 11, 2017
Spread the love

Rabat – Moroccan economic growth will reach 4.8 percent in 2017, mainly due to a “vigorous” increase in agricultural activities, says Nicolas Blancher, head of the consultative mission of the International Monetary Fund (IMF).

While the High Commission for Planning (HCP) reviewed its economic growth expectations for 2017 upward from 3.5 percent to 4 percent, the FMI estimates that national economy would register a 4.8 percent growth this current year.

“Overall, the economic outlook for 2017 is favorable: after the drought in 2016, growth is expected to rebound to 4.8 percent this year, thanks to a vigorous recovery in the agricultural sector,” explained Blancher during a meeting with head of government Saad Eddine El Othmani on Monday in Rabat.

However, non-agricultural growth is still lagging behind, as Blancher expects the sector to “accelerate modestly” with a 0.2 points increase.

Speaking at a press conference in Rabat, following a mission on the 2nd review of the Precautionary Liquidity Line (LPL) agreement in favor of Morocco, Blancher explained that “Morocco’s performance and macroeconomic policies remained solid, despite the volatility of agricultural production, weak growth in trading partners, and external risks that remain high.”

While the IMF forecasts a slowdown of inflation to 0.9 percent for 2017 and a budget deficit reduction to 3.5 percent of GDP, Blacher stated that “unemployment remains high, especially among young people and women.”

For the head of the consultative mission of the IMF, “the IMF team notes with satisfaction that the Moroccan authorities intend to pursue fiscal reforms, including a more equitable and fair tax system, and reduce public debt to less than 60 percent of GDP by 2021.”

The IMF says these efforts will create the room for maneuver needed to reduce poverty and promote employment through public spending, particularly through investment and social programs that benefit the poorest segments of the population and help reduce inequalities.