Rabat - Same-sex marriage became legally recognized in the UK in 2014 but on Monday another important milestone was reached when the first gay Muslim wedding took place. 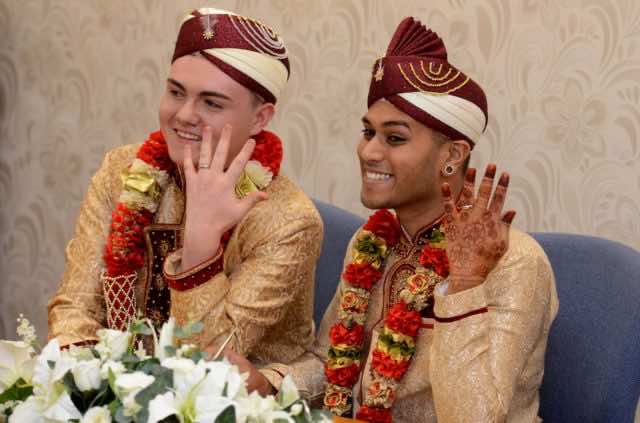 Rabat – Same-sex marriage became legally recognized in the UK in 2014 but on Monday another important milestone was reached when the first gay Muslim wedding took place.

The couple, namely Jahed Choudury, 24, and Sean Rogan, 19, decided to wed in a public ceremony to illustrate to the world that “you can be gay and Muslim.”

Choudury is all-too familiar with the phenomenon of marginalization, having been banned from attending his local mosque because of his sexual orientation.

He describes the treatment he received from his traditional Bangladeshi community as so harsh that he attempted to commit suicide.

In an interview with his local newspaper, the Express & Star, Choudury revealed that “People would spit on me, empty rubbish bins on me, call me a pig and the Muslim people would shout ‘haram.'”

He credits meeting partner, Rogan, with saving his life. Rogan approached Choudury when I found him seated on a park bench, crying. The two have been inseparable ever since.

Their very public wedding was an opportunity for the couple of share their experience with a larger community. “I want to say to all people going through the same thing that it’s okay – we’re going to show the whole world that you can be gay and Muslim,” Choudury said.

Though it is believed to be the first gay Muslim marriage to occur in the UK, there is no way to confirm the fact because the Office for National Statistics (ONS) does not routinely record religions at non-religious ceremonies.