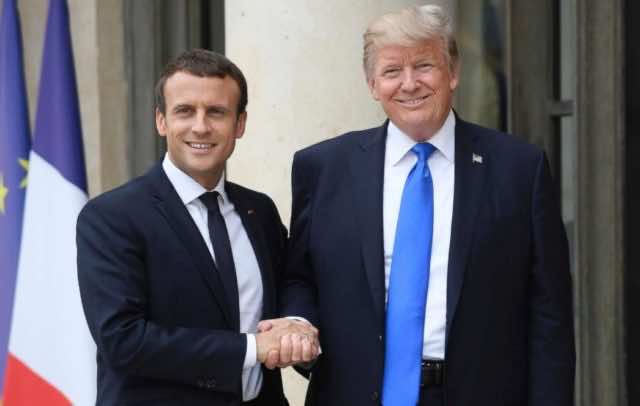 Rabat – During a trip to Paris this week, United States President Donald Trump is scheduled to meet with French President Emmanuel Macron to discuss counter-terrorism and the conflict in Syria.

After a formal greeting by French President Emmanuel Macron, Trump will have a tour of Napoleon’s tomb at Les Invalides. The focal point of the trip however will be the meeting between Macron and Trump at the Elysée Palace. Macron and Trump will discuss issues regarding counter-terrorism, the Syrian Civil War, and French military operations in North Africa. The two will be holding a press conference following their discussion.

Trump arrived in Paris on Thursday morning alongside First Lady Melania Trump to commemorate the 100th anniversary of the US’ entry into World War I, as well as to celebrate Bastille Day.

Macron invited Trump to Paris several weeks ago despite the tension between the two leaders. Prior to departing Trump wrote on his personal Twitter account, “Getting [ready] to leave for France @ the invitation of President Macron to Celebrate &honor Bastille Day and 100 [Years] since U.S. entry into WWI.”

The two leaders have had conflicting opinions in the past, particularly over environmental issues. Trump’s decision to pull the United States out of the 2015 Paris climate accord caused dismay to many politicians. Shortly after Trump’s decision, Macron tweeted “Make our planet great again,” a play on Trump’s infamous campaign slogan “make America great again.”

Though the topic of climate change may come up in the meeting, the primary objective is to review matters regarding counter-terrorism. Emmanuelle Lachaussée, a spokeswoman for the French embassy, said in an email that “the main objective is to show our strong friendship over the years and that despite differences we remain close allies.”

Upon arriving Thursday morning, Trump proceeded to the US ambassador’s residence where he took meetings, particularly with members of the US military and their family. During the meetings, the First Lady Melania Trump visited Hôpital Necker Enfants Malades, a children’s hospital in Paris, to meet with patients and staff.

Trump will complete his visit to Paris on Friday where he will attend the annual Bastille Day parade on the Champs-Élysées alongside Macron.