Rabat - Village President of Kalkaska, Michigan, Jeff Sieting, has refused to apologize for remarks he made on his personal Facebook page, calling for the death of “every last Muslim.” 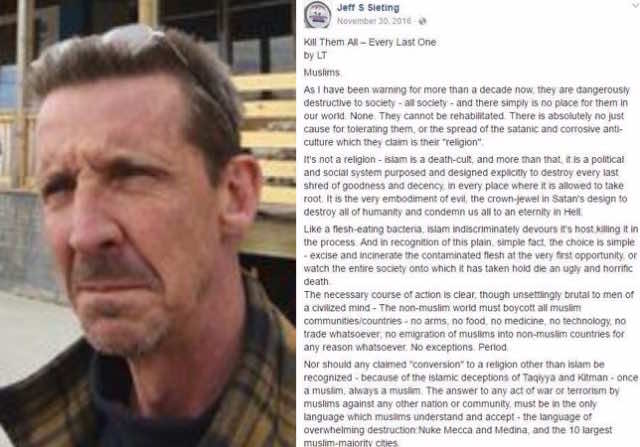 By
Constance Renton
-
Constance graduated from the Television and Radio Broadcasting Program at Canadore College in 1983.
Jul 14, 2017
Spread the love

Rabat – Village President of Kalkaska, Michigan, Jeff Sieting, has refused to apologize for remarks he made on his personal Facebook page, calling for the death of “every last Muslim.”

Despite intense criticism and calls for his removal from office by his own constituents, Sieting is unrepentant.

Feeling he has nothing to apologize for, Sieting has gone as far as to endorse the use of nuclear weapons to obliterate the world’s ten largest Muslim cities.

Local resident, Cindy Anderson, is one of those trying to remove Sieting from his position. She disagrees with his stance that his posts are protected under the US constitution’s First Amendment.

Sieting acknowledges that his views are not shared by everyone but maintains that, regarding Muslims, “there is simply no place for them in our world.”

It is worth noting that hotel owner, Sieting, placed a sign outside of his establishment asking for people to pray for US President, Donald Trump.

The village president, however, does have his fans. Joyce Golden, an area resident, posted the following comment aimed at his detractors: “If you don’t want to read it, get off of (his Facebook page),” she said.

“From what I do know, you are a very honest, faithful, hardworking man and I thank you for that. I hope you continue and stand your ground for your beliefs. I don’t believe he has to represent everybody.”

Other area residents have created their own Facebook page called Kalkaska Residents for Peace to combat Sieting’s hate speech. Followers currently number approximately 150. They are hard at work campaigning to find someone to run against Sieting in the town’s 2018 election.