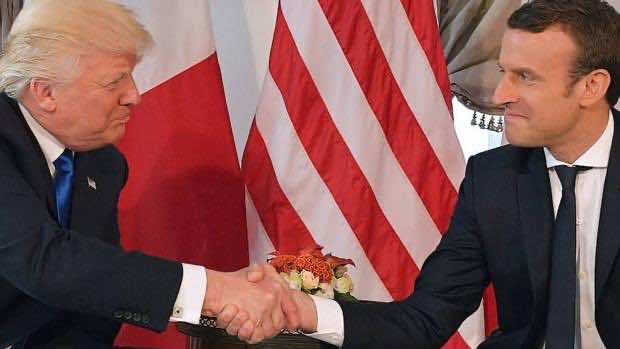 Rabat – United States President Donald Trump met with French President Emmanuel Macron on Thursday during his two-day visit to Paris, setting aside past disagreements to discuss issues regarding counter-terrorism, Syria, and climate change in an amicable press conference.

In his opening statement, Trump spoke of the long-standing relationship between France and the United States. “Our two nations are forever joined together by the spirit of revolution and the fight for freedom,”the presidentsaid.

The press conference was a part of Trump’s visit to Paris to celebrate Bastille Day as well as the 100th anniversary of the United States’ entry into World War I.

In the past, the two presidents have had many differences in opinion, particularly over environmental policies. Trump faced criticism from Macron following his decision to pull the United States out of the 2015 Paris climate accord.

In his opening statement, Macron acknowledged their opposing views, though the French president stressed the importance of the climate accord.He recognized Trump’s focus of implementing campaign promises and vowed to stay loyal to the Paris climate accord.

However,the meeting raised the question that the US president might change his mind. When Trump was later asked about the climate agreement,responding, “Something could happen with respect to the Paris Accord. We’ll see what happens.”

The two leaders also discussed counter-terrorism, political stability, and the situation in Iraq and Syria. According to Macron, he and Trump have similar views on terrorism and will continue to work together to eradicate it. When asked about Bashar Al-Assad, Macron again stated that he hopes to continue working closely with the United States. The French president stressed that any use of chemical weapons will result in immediate action.

Macron and Trump discussed possible political solutions for Syria after the war and agreed to continue to work together to launch diplomatic initiatives to create a “roadmap” for Syria. They said that they hope to find a political solution as well as support the United Nations’ efforts in the war-torn country.

Throughout the visit, Trump and Macron displayed their amiable relationship. On Thursday night, Trump and First Lady Melania Trump accompanied Macron and First Lady Brigette Macron for dinner at the Jules Verne restaurant on the second floor of the Eiffel Tower. Earlier in the day Trump commented on his relationship with Macron, he stated, “the friendship between our two nations –and ourselves, I might add –is unbreakable”.

Trump concluded his visit on Friday at the Bastille Day parade, which included both French and American military units.