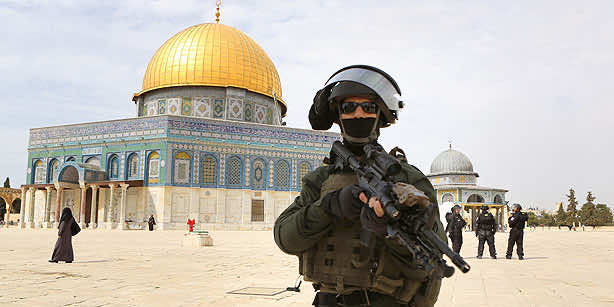 Claiming the three men were carrying out an armed attack inside the compound, Israel admits to having shot and killed the Palestinian men and cancelling Friday prayers.

It represents the first time in nearly 50 years that prayers have been interrupted at the mosque. Yoram Ha-Levy, Jerusalem police district commander, announced the cancellation of Friday prayers to the public.

In response to the alleged attack, Israel has deployed hundreds of additional troops and erected road blocks at the entrances to the Old City.

In an interview with Turkish Anadolu agency, the mosque’s director, Omar Qiswani, condemned the mosque’s closure, saying “This is a dangerous step and clear attack on freedom of worship.”

In response to and in defiance of the Friday prayer cancellation, Jerusalem’s mufti, Sheikh Mohammad Hussein, has called on Muslims to gather around the old city walls to honour their Friday prayer obligations.