Morocco World News
Home Opinion One Year after Zero Mika: Where Do we Stand?

Rabat - It has been one year since Zero Mika law has come into force – are we using fewer plastic bags?

By
Zineb Raji
-
Zineb Raji was born in Azrou, Morocco and obtained her bachelor degree in International Studies with a minor in Communication Studies from Al Akhawayn University in Ifrane.
Jul 15, 2017
Spread the love

Rabat – It has been one year since Zero Mika law has come into force – are we using fewer plastic bags?

We have seen good progress at the beginning of the campaign and still so, but distribution and use of plastic bags is steadily increasing in some venues that are still not convinced. Zero Mika’s progress, at this stage, seems to be regressing little by little, which is a sign that something is and was wrong. Lots of people had stockpiled reserves of plastic bags days before Zero Mika law came into effect. This demonstrated that the transition to more environmental friendly alternatives would be a hard task.

Just after the law was implemented, all actors had been mobilized to contribute to Zero Mika campaign, and we heard everywhere about the availability of plastic-free bags and other environmental friendly alternatives. Things had turned upside down to ensure the success of this anti-plastic bag campaign. Afterwards, we started to see fewer plastic bags in our surrounding landscapes, whether hanging from the branches of trees or flying in the air.

However, five or six months after launching the campaign, we started to notice that plastic bags were sneaking back and increasingly used in our souks and grocery stores and by small traders, and sellers. Now, we have a clear signal that Zero Mika is not an easy challenge as we thought it was, and it would be hard to decouple lot of Moroccan consumers’ behavior from plastic bag use.

In its first months, the level of excitement and commitment demonstrated by different actors serving the anti-plastic bag campaign was convincing and promising, and this translated into quick, concrete, and positive results in a short period. However, the targets of the law are not only big supermarkets and big stores, but everyone. We notice nowadays that plastic bags are not available as abundantly as before, but lack of intervention at this stage would mean killing Zero Mika in the long run.

But what is the problem? Is it of effective follow up and supervision? It should not be. If we are serious enough to tackle this problem, we will apply the law and prevent any obstructions whether one year or hundred years after Zero Mika law.  A huge number of violations were reported to be detected in the news, which provided relief that everything was going in the right direction. However, questions are being raised now about the nature of these violations and the sentences to jail and fines reported: did they target the big sources and manufacturers? Are there any traceability systems to track these and exterminate them, or did they target only the small traders and seller? Of course, the source of this problem revolves around the manufacturer or producer of Mika who has found a vulnerable enough environment to build a business against law. Zero Mika should not be another phantom law, as it has to be effectively implemented and supervised, and its supervisors in the field themselves have to be supervised.

Consumers are to blame but to a limited extend, as wherever they go they are offered plastic bags, and if they are not convinced enough to say no, it is still normal for them to use plastic bags. Zero Mika now confuses everyone, as if there should be less or even no plastic bags, how come they are accessible to in some places?

Informal production of plastic bags is the real nightmare, and their illegal distribution and manufacturing seem to be gradually spreading. These traffickers are provided with an opportunity to increase their margins of benefit, and Zero Mika campaign seems to be helping them, so far.  If things continue in this direction, Zero Mika law will just turn plastic bags into something that is charged for instead of free.

We have a long history with plastic bags. What has been done is clearly not enough, and it will take years if not decades of awareness to reach the law’s goal. We must keep stretching and expanding customers’ awareness as long as it takes. To advertise it from time to time, or bring it into attention occasionally, does not seem to play the required role. Make no mistake; there isn’t a lot at stake for people as long as they are not convinced about the serious environmental and health problems associated.

Most people are left in the middle of the process. They still do not connect the dots, and they still do not see how their little daily acts are very important to bring about the desired change. The issue has to be kept at the top of our minds as long as it is necessary. We have to be reminded of it until consistent evidence is clearly demonstrated in our landscape, practice, and behavior. More importantly, plastic-free bags have to be made affordable, taking into consideration life’s heavy responsibilities for poor breadwinners. Otherwise, only 10 or 20 percent of people will be using plastic-free bags.

It will not be easy to cement this new concept throughout the whole country. The thing that’s important to know is that resistance to change at the beginning is normal after such long use of plastic bags. It is difficult for lot of people to adopt this new habit, to fight the forces pulling them towards this quick fix and easy solution.

The bottom line is that change takes time and no law of such nature could come into full force in six months. What I find strange the most is that either these lawmakers were unrealistic in their expectations or they did not make a reading of the consequences of this law and prepare action plans for possible scenarios of circumventing it.  And in either case, this is no good. The experience of other countries in relation to plastic bags demonstrates that it requires a clear vision with short and long terms objectives taking decades of work. It is proved effective the most when it comes from civil society and all actors take part in its creation, but none of these conditions seem to have been fully taken in account.

From this quick intervention of Zero Mika, I see that we might be underestimating the magnitude of problems we are facing, and we are so attached to quick outcomes that we forget how to go patiently step by step to instill real and not fake change. One simple rule of thumb to keep in mind: if we are unable to live by a simple law as Zero Mika, it will be hard to correct many subtle and much serious problems facing our society. 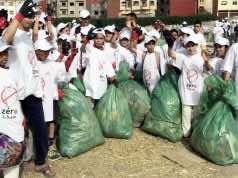