Rabat - Music enthusiasts set up their lawn chairs and planted themselves in front of the kick off of Maroc Telecom’s 16 Annual Beach Festival in M’diq on July 14. 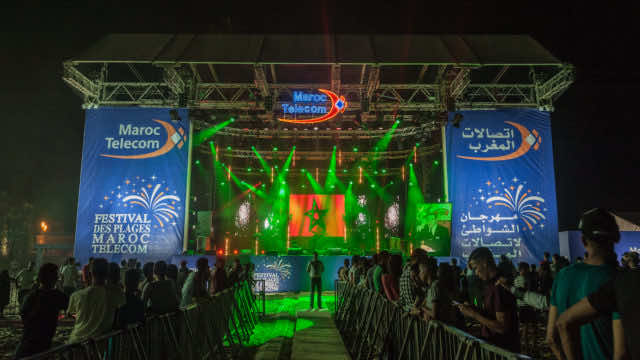 Rabat – Music enthusiasts set up their lawn chairs and planted themselves in front of the kick off of Maroc Telecom’s 16 Annual Beach Festival in M’diq on July 14.

Starting Friday, July14, concert music belted out of a performance given by Samy Ray in Mdi’q, while the next night Martil festival goers welcomed Mourad Asmar.

With more than 6.5 million visitors on 2016, the festival has established for itself a place in the summer season festival circuit, the organizers wrote in a press release.

Since its creation in 2002, the festival gives music lovers the chance to meet Moroccan and international artists in Morocco’s coastal cities.

Spanning throughout the summer season, Maroc Telecom’s Beach Festival offers a diverse musical program, inviting both national and international artists performing all styles of music and giving visitors a summer to remember.

Originally called the Jawla and Maroc Telecom Beach Festival, the event offers entertainment for children and teenagers bysetting up activities sports and cultural activities that foster to these age groups, including beach volleyball, beach soccer, inflatable games, and painting and coloring workshops.

This musical and cultural rendezvous allows for both national and international tourists to enjoy their summer vacation as much as it works forthe promotion of the Moroccan culture, heritage and music, making coastal cities in Morocco attractive destinations with the the objective of boosting tourism.