Rabat - July 20 has witnessed confrontations between police and protesters in the city of Al Hoceima after a massive march in support of detained Rif activist was heavily confronted by security forces, deployed in the city and its outskirts. 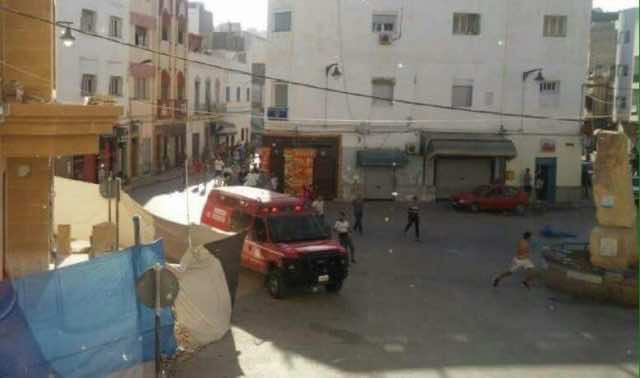 Rabat – July 20 has witnessed confrontations between police and protesters in the city of Al Hoceima after a massive march in support of detained Rif activist was heavily confronted by security forces, deployed in the city and its outskirts.

As several media outlets and journalists and activists on the ground reported, security forces intervened using tear gas to nip the protest in the bud.

The police intervention could lead to more tension both in the region and other parts of Morocco, where the Hirak protest movement enjoys wide support.

As the countdown for the march scheduled for the afternoon approached, activists and journalist were in full preparation to broadcast news of the big event announced just a few days before.

The internet is a key tool to keep the outside world posted of what is going in the northern Moroccan city.

Protests in the area calling for local development and end of the decades-long marginalization of Rif region have continued now for nine months following the death of local fish vendor Mouhcine Fikri, awakening Moroccans to the reality of the still-tense relationship between the historically rebellious region and the government.

Traditional and citizen journalists in the city on July 20 posted on Facebook complaining about slow internet, indicating to them early on that, in addition to anticipated police presence, they could have a hard time getting the picture to a large Moroccan and international audience curious to know what would happen during the march, which the government had officially banned three days earlier.

Outside the city of Al Hoceima, checkpoints were erected by law enforcement, checking potential protesters from neighboring towns entering the city.

The atmosphere was tense as activists lashed out at police officers. In a video uploaded on YouTube, an activist is seen shouting at the “human barrier” formed by security officers.

“We are here to say that the Rif is not separatist. The Rif has economic and social demands,” cried the activist.

Inside the city the atmosphere was even tenser as law enforcement elements tried to disperse protesters by firing tear gas.

According to local reporters, protesters came from different neighborhoods in the Al Hoceima such as Carabonita, Florido, Parki N Chita, Sidi Abid, and El Menzeh, seeking to gather in key centers such as Place des Martyres, the city’s main square.

Police interventions to break up protests led to the formation of smaller, decentralized demonstrations circulating in different Al Hoceima neighborhoods.

Pictures posted on social media show that a number of protesters were injured, while others fainted from tear gas fired by police.

Videos posted on YouTube showed local residents helping their fellow protesters by washing their faces with water, and some Twitter users posted thanks to different venders who provided relief with onions and soda.

Despite massive police intervention, protesters did not throw in the towel. Protests kept going at night, with police continuing to fire tear gas into the demonstrations.

The Way the Government Sees It

Before the July 20 march started in Al Hoceima, the government spokesperson Mustapha Al Khalfi reiterated the government’s position regarding the decision to ban the protests.

Throughout the last months of the crisis in Rif, the government’s harsh reactions to the protest movement, such the arrest of key Hirak members, the heavy charges pressed against them, the misstep of accusing the protest movement of advocating for separatism, and the violence against demonstrators, have received widespread public disapproval.

“The government assumes full responsibility,” said El Khalfi. According to the government, the continuous demonstrations are impeding its attempts to speed up the development projects aimed at meeting the local population’s demands.

For those projects to be carried out within this summer’s tourism season, the government believes that local residents need to “calm down” and cease demonstrating.

The government said that it took steps to restore calm in the city by reducing the number of security presence in the past few days.

The decision by the protest movement and its supporters to go along with their plan to organize the July 20 march needed to be responded to “firmly.”

In order to justify the police interventions, the government has pointed to what it says is violence against security elements by protesters.

The governorate of Al Hoceima said in a statement on Thursday that 72 members of public security elements were injured during the protests, while 11 demonstrators were injured because of tear gas and were taken to hospital.

The ministry said that some masked protesters had “provoked” security elements by throwing stones at them. Among the injured police officers, the statement added, two are suffering from serious injuries.

The release said also that two police vehicles were damaged and burned in the neighboring town of Ajdir.

End of the Tunnel

The government’s policies are increasingly unpopular and it seems at loss on how to put an end to the unceasing protests.

Calls from the government on the population to “calm down” fell on deaf ears, as 176 detained Rif activists are still behind bars in preventive detentions.

Their number is due to increase after the July 20 march due to the arrest of several other activists.

Despite calls from detained leading Hirak members such as Nasser Zafzafi to maintain the movement’s commitment to peaceful demonstration, the non-release of prisoners and the continuous persecution of demonstrations has deepened the gap between the government and local population.

Some have warned that Hirak might slide into violence. Others point to a lack of trust between Rif and the government, as the official response has revived painful memories of the region’s neglect during the reign of the Late Hassan II.