Rabat - Three Palestinian men have reportedly been shot dead in Jerusalem and hundreds have been wounded in demonstrations Friday over new security measures implemented at the Al Aqsa compound last week. 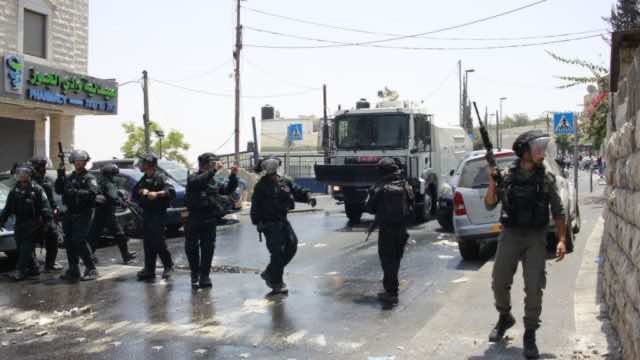 By
Constance Renton
-
Constance graduated from the Television and Radio Broadcasting Program at Canadore College in 1983.
Jul 21, 2017
Spread the love

Rabat – Three Palestinian men have reportedly been shot dead in Jerusalem and hundreds have been wounded in demonstrations Friday over new security measures implemented at the Al Aqsa compound last week.

According to the Palestinian Ministry of Health, the first man to be reported dead was an 18-year-old Palestinian, shot and killed in Jerusalem’s Ras al-Amud neighborhood. His death was confirmed independently by the Red Crescent and Israel security.

A hospital in Jerusalem reported to the Associated Press that a second man was killed by live fire after demonstrations led to clashes following Friday noon prayers.

The Palestinian Ministry just confirmed the death of a third Palestinian man but have offered no details.

Fearing mass demonstrations called for by Palestinian leaders, Israel barred entry to the Al Aqsa mosque compound to Muslim men under the age of 50 on Friday.

A statement issued by Israeli police officials announced that “Entry to the Old City and Temple Mount, will be limited to men aged 50 and over. Women of all ages will be permitted.”

Palestinians have been protesting the installation of metal detectors at the entrances to Al Aqsa, put in place by Israeli authorities a week ago, following the deaths of two Israeli police officers in the Old City, allegedly at the hands of three Palestinian assailants. The three Palestinians were tracked to the compound where they were shot and killed by Israeli police shortly after the June 14 attack took place.

Israel has alleged that the weapons used in the attack were smuggled into the compound and that the metal detectors are a necessary security feature. Palestinians, however, argue that the added security upsets the status quo regarding the governorship of Al Aqsa. They fear it is a sign of worse violations to come.

Israeli Prime Minister, Benjamin Netanyahu, has pledged that existing governorship agreements regarding the site “will be preserved.”

Since their installation, the metal detectors have inspired nightly confrontations between Israel security and Palestinian protesters. Israeli police revealed they have used tear gas grenades in response to rioters who threw stones at officers.

In response to the call for a mass demonstration, Israel has deployed approximately 3,000 additional security personnel in and around Jerusalem and every street accessing Al Aqsa has been closed to traffic. Buses carrying Muslim worshippers were barred entry to the city Friday.

According to a report on Al Jazeera, the Palestinian Prisoner’s Club has claimed that Jerusalem’s Fatah leader, Hatem Abdel Khader, is among ten Palestinian activist who have been detained.

Meanwhile, Palestinian President, Mahmoud Abbas, has been actively encouraging the international community to demand that Israel dismantle their new security measures and put an end to escalating tensions in the Old City.