Rabat - A home in Massachusetts Avenue Heights, one of Washington D.C.’s wealthiest neighborhoods, is now a Moroccan property.

Rabat – A home in Massachusetts Avenue Heights, one of Washington D.C.’s wealthiest neighborhoods, is now a Moroccan property.

Described by Washington Business Journal as “One of the highest home sales of the year,” the mansion was purchased for USD 14 million.

Massachusetts Avenue Heights is known for being one of the best neighborhoods for home sales in the United States capital in 2017.

The new Moroccan property was built in 1962 and was formerly owned by businessman, Mandell Ourisman, and his wife, U.S. diplomat and former U.S. Ambassador Extraordinary and Plenipotentiary to Barbados and the Eastern Caribbean, Mary Ourisman.

The neighborhood is home to properties owned by public personalities such as Treasury Secretary, Steven Mnuchin, whose home was purchased in February for more than USD 12 million.

Next door neighbor is the chairman of Black Entertainment Television (BET), Debra Lee, whose house is worth USD 11.5 million.

The Massachusetts Heights’ home is just next door to Kalorama Heights, another upscale neighborhood where the Obamas bought their home this may. U.S Secretary of State Rex Tillerson also owns a house in the political heavyweight area.

It is not yet clear what the newly-purchased property is going to be used for, or if it will be used as a residence for Morocco’s ambassador to Washington D.C. Lalla Joumala Alaoui.

Facts about the residence 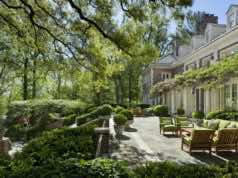