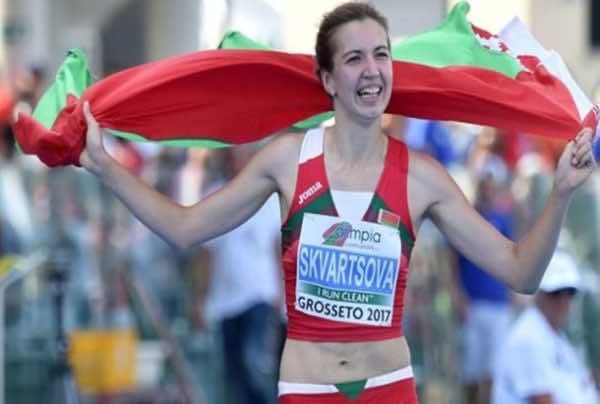 Casablanca- Belarusian triple jumper Violetta Skvartsova smirked and walked off the podium at a medal ceremony at the European athletics championships in Grossetto, Italy after the wrong anthem was played.

During the coronation ceremony after winning the gold triathlon, which usually wraps up with the national anthem of the winner, the Belarusian athlete was surprised when the wrong song was played.

Organizers tried to convince Skvartsova to step up on the podium again, but the athlete was too offended and expected her native country to be praised through the anthem.

The Italian side immediately apologized, proposing to hold the award ceremony all over again.

The Belarusian athlete later apologized and received her championship gold medal appropriately, to the sound of Belarus’ official anthem.

At the age of 19, the Belarusian athlete is ranked 3120 in overall women’s world rankings, with a score of 1059 in triple jumping.

The athlete has participated in many championships, making personal bests in many categories such as long jump and triple jump throughout the past 3 years.

Skvarrtsova best achievement of this season was a triple jump with a score of 13.60, made during her latest performance on July, 6.

According to statistics, Skvartsova is a sharp mind and hungry soul, thoroughly improving her career as a triple jumper. However, the athlete is keeping her pride as an athlete of Belarusian origin a fundamental standard.