Rabat - Saudi prince, Abdulaziz bin Fahd, son of the late Saudi King Fahd, has used Twitter to voice his support for Palestinians at Al-Aqsa and is urging Muslims and Arabs everywhere to do the same. 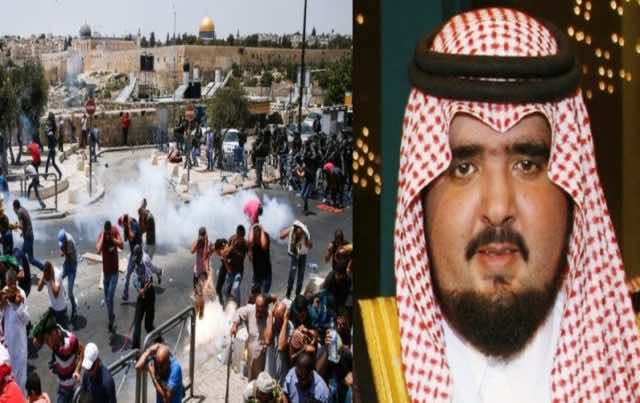 Rabat – Saudi prince, Abdulaziz bin Fahd, son of the late Saudi King Fahd, has used Twitter to voice his support for Palestinians at Al-Aqsa and is urging Muslims and Arabs everywhere to do the same.

Citing an obligation toward the Palestinian people, the prince’s first tweet warned of the consequence of not showing support: “Every Muslim is obliged to support our brothers in Palestine and the Holy Al-Aqsa Mosque, everyone within their means. O nation of Muhammad, show them who you are. Neglecting Al-Aqsa would be a disgrace and God will hold us accountable.”

This was followed by a second tweet that read: “O nation of Muhammad and Allah, the third mosque is a prisoner of the criminal occupation, is there no wise among us? Let us go and fight, we would either be victorious and save it, or we fail but will be forgiven by our Lord.”

The tweets were followed by the posting of a video of his father, the late Saudi King Fahd, during a 1980’s visit to Ronald Reagan’s White House.  During the visit, the monarch plead the case of Palestinian independence.

Saudi Arabia has yet to release any formal statement regarding the situation at Jerusalem’s Al-Aqsa mosque, which was the site of bloodshed last weekend, following demonstrations in protest of metal detectors installed at the site by Israel.

The added security was introduced after the June 14 deaths of two Israeli police officers in East Jerusalem. Three alleged Palestinian perpetrators were tracked to Al-Aqsa following the deaths where they were shot and killed by Israeli security.

Israel met last week’s demonstrations with a violent crackdown which resulted in the deaths of four Palestinians. Three Israelis were also killed by a lone Palestinian attacker in a separate but related incident near Ramallah.

Early Tuesday, Israel agreed to the dismantling of the offending metal detectors, in favour of more advanced surveillance methods yet to be announced.