Rabat - A Moroccan living abroad says she was stopped from swimming the Aquaparc in Casablanca, in a video shared on social media.

Rabat – A Moroccan living abroad says she was stopped from swimming the Aquaparc in Casablanca, in a video shared on social media.

“Today I came to Aquaparc, and I came swimming with swimming clothes,” says the woman, gesturing to her burkini with a can of Pepsi. “You know, adequate Muslim swimming wear, and they told me I wasn’t allowed to. So I was really frustrated because I’m in a Muslim country and yet I don’t feel free. I feel more free in America.”

“It’s so heartbreaking,” she says.

After repeating the story in Moroccan Arabic, the woman concludes, “May God show them the way.” [“Allah yahdihum”]

A representative of Aquaparc Casablanca told H24info that the burkini “doesn’t respect” the internal rules of the waterpark. They added that banning the full-body swimsuit is part of “security measures” taken by the establishment.

Others commenting on the video on Facebook shared similar stories of being prevented from swimming at the Aquaparc.

“I went on vacation from the USA and travelled to Casa and took my children to the Aquaparc, but they didn’t let me enter with my children,” wrote Amoun Emi. “My son is just one and a half, so I can’t leave him by himself in the water, but they didn’t let me. The people were complaining and didn’t want to swim with us. Knowing that we swim with people in the USA without problems. And the women were looking at us, like I was dirty.”

The burkini has become a source of controversy in recent years, after cities in France, among other European countries, attempted to enact laws banning the garment. In 2014, several resorts in Marrakesh were said to have banned the full-body swimsuit for “hygiene reasons.”

In late July, a woman reported being kicked out of an Egyptian beach resort for wearing the burkini. 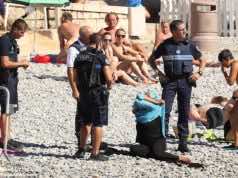