Rabat - In the summer of 1988, 30,000 Iranian political prisoners, supporters of the People's Mujahedin of Iran, were massacred. As the 30th-anniversary approaches, the families of the victims and the citizens of Iran still await justice and an international tribune. 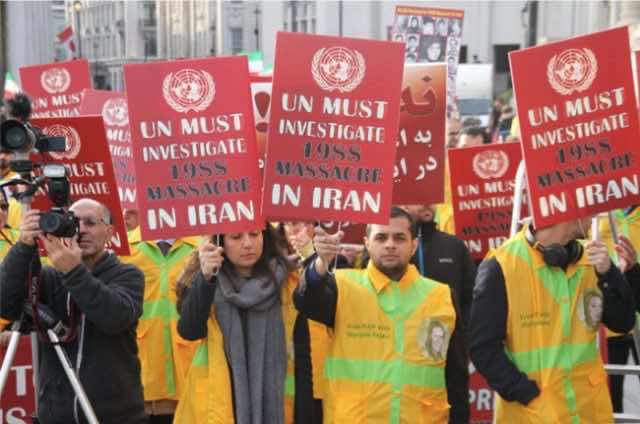 By
Hassan Mahmoudi
-
Hassan Mahmoudi is a human rights advocate, specializing in political and economic issues relating to Iran and the Middle East.
Jul 27, 2017
Spread the love

Rabat – In the summer of 1988, 30,000 Iranian political prisoners, supporters of the People’s Mujahedin of Iran, were massacred. As the 30th-anniversary approaches, the families of the victims and the citizens of Iran still await justice and an international tribune.

Thousands of Iranian political prisoners were systematically executed during a state-sponsored, five month-long killing spree in 1988. The prisoners, some as young as 14 years old, were killed in groups—loaded onto trucks and hanged from cranes. Over the past three decades, the regime has blocked all attempts at investigating the extent of the massacre.  They have gone to great lengths to conceal the truth about the murders, including damaging cemeteries with bulldozers and toppling the headstones that mark the martyrs’ graves

There is neither a single government institution nor criminal justice system to deter crime and enforce a penal code in Iran. The Supreme Leader, Ali Khamenei, controls everything.  He sets the tone and direction of Iran’s domestic and foreign policies and has allowed many former members of the “Death Commission” to remain in power. Figures like Mostafa Pour-Mohammadi and cleric Ebrahim Raisi are heavily involved in contemporary Iranian politics. The former is presently the minister of justice under President Hassan Rouhani’s Administration and the latter was the Supreme Leader’s in the 2017 presidential election—both have defended the government’s actions starting on July 19, 1988.

“[A] dictatorship that appoints as its justice minister someone who killed 30,000 people is telling you everything you need to know about the core nature of the dictatorship,” said Newt Gingrich, 50th Speaker of the United States House of Representatives, at the Free Iran Rally in Paris on July 1, 2017.  “[D]ictatorships like the one in Iran threaten freedom anywhere,” according to Gingrich, who called Iran the largest supporter of state terrorism in the world.

The massacre was ordered by a Khomeini decree, called a fatwa, that reads: “[P]olitical prisoners throughout the country who remain steadfast in their backing for the Mojahedin (MEK) are condemned to execution.”

Despite the preservation of policies that rely on crackdowns, tortures, and executions over the past three decades, , the regime has failed. “You will someday be proud to say you were a part of what freed Iran,” Gingrich said.

“I want to salute you today for your courage and for your perseverance of the MEK and the NCRI,” Said Linda Chavez, Chairman of the Center for Equal Opportunity and former director of the Office of Public Liaison, at the Paris gathering.  “You are the ones who remain committed to freedom and to democracy for Iran and to eradicate the suppression, the terrorism, and the regime’s demonizing campaign that has been directed at you.  Your perseverance gives us hope that we shall, in the end, defeat the phenomenon of Islamic fundamentalism, whose heart beats in the clerical regime in Iran.  I wish you a good meeting, and I wish that your message will be carried throughout the world.”

Despite the dark legacy of Iran’s dictatorships, the “light of liberty can overcome and replace the darkness of the tyrannical Iranian regime,” remarked Tom Ridge, the former United States Secretary of Homeland Security, at the rally. “The light of freedom is kept going by all those who have lost their lives for the cause.”

Greek philosopher Xenophon wrote: “The true test of a leader is whether its followers will adhere to his cause from their own volition, enduring the most arduous hardships without being forced to do so, and remaining steadfast in the moments of greatest peril.”