Tetouan - The governor of Bank Al-Maghrib (BAM), Abdellatif Jouahri, presented the central bank’s annual report on the kingdom’s economic, monetary, and financial progress for the year 2016 to King Mohammed VI on Saturday at the Royal Palace of Tetouan. 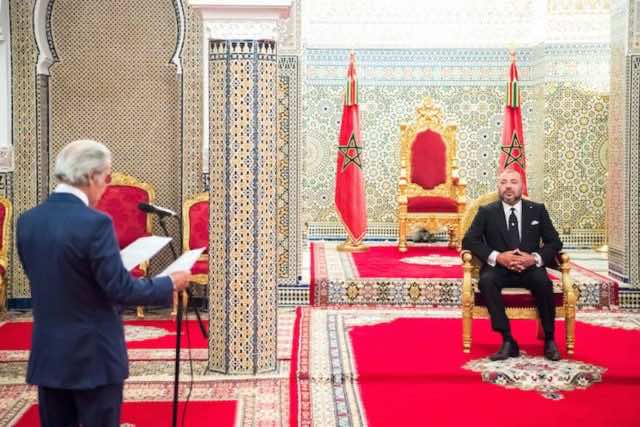 Tetouan – The governor of Bank Al-Maghrib (BAM), Abdellatif Jouahri, presented the central bank’s annual report on the kingdom’s economic, monetary, and financial progress for the year 2016 to King Mohammed VI on Saturday at the Royal Palace of Tetouan.

In his address before the King, Jouahri stated that domestic economic growth slowed down to 1.2 percent in 2016, amid a sluggish global economy and unfavorable weather conditions.

This deceleration adversely impacted the labor market, which lost a number of jobs and posted a new decline in the participation rate.

Concerning macroeconomic balances, Jouahri pointed out that fiscal deficit stood at 4.1 percent of GDP, and the current account deficit widened to 4.4 percent of GDP, while international reserves continued to grow, reaching the equivalent of six months and a half of imports. Under these conditions, inflation stabilized at 1.6 percent.

Jouahri added that in response to these developments, Bank Al-Maghrib maintained an accommodative monetary policy to support economic activity. It cut its key rate to 2.25 percent and continued its program to support the financing of very small-, small-, and medium-size enterprises.

It also carried on with the reforms included in its prudential program to reduce risks faced by Moroccan banks. He indicated that the banks managed to maintain a good level of profitability and capitalization, notably thanks to their expansion in Africa and the diversification of their activities.

He also said that as part of implementing the new banking law, Bank Al-Maghrib stepped up efforts to finalize the regulatory framework for participative banks and issue circulars on risk management and customer protection.

The governor of Bank Al-Maghrib went on saying that the developments observed in 2016 suggest that the economy is still fragile, remaining vulnerable to the vagaries of the international economy and weather conditions.

He underlined that, despite the continuing high level of investment, the various sectoral strategies launched in recent years, and the measures taken to improve the business climate, the economy has not yet found the right trajectory and the development model to permanently place it on a path to higher growth.

In order to address these challenges, he said it is imperative to initiate a new generation of reforms to improve productivity and strengthen the resilience of the economy amid an uncertain international environment.

He pointed out that the gradual move to a flexible exchange rate regime, which will improve the domestic economy’s capacity to absorb external shocks and preserve its competitiveness, fits into this strategy.

Jouahri further said that the challenge of employment cannot be overcome only by achieving higher growth rates, but also requires enhancing the capacity of the education and training system to meet labor market needs, indicating in this regard that the reform of the education system has emerged today as a top priority for the country.

He stressed that the success of this reform remains dependent on the commitment of all stakeholders to set up an environment of peace and solidarity among the different actors in order to guarantee the best conditions for its successful implementation and its completion within a reasonable timeframe. Strengthening inclusive growth would also require policies aimed at redistributing national wealth and reducing social and territorial inequalities, he added.

Finally, the governor of Bank Al-Maghrib underlined that despite these internal challenges, Morocco, under the judicious leadership of the King, continues to stand as an island of peace and stability in the region and enjoys great confidence on the international stage.

He called on all the country’s forces – public authorities, the private sector and social partners –to make every effort to transform the latent opportunities of this confidence into tangible profits that could help accelerate growth and improve its inclusiveness.