Toronto - A Norwegian far-right group calling themselves Fatherland First, has been publicly shown up on social media after posting a picture of dark empty bus seats on a public transport vehicle, which they mistakenly identified as women wearing burkas. 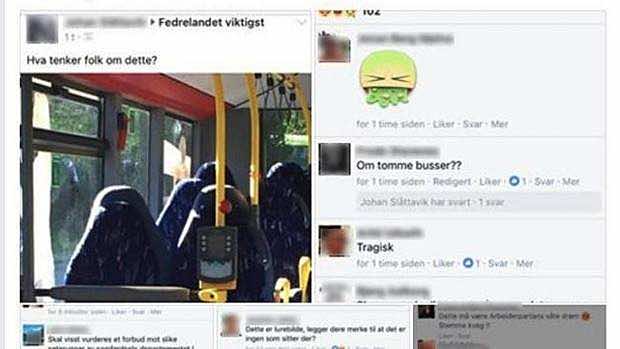 By
Constance Renton
-
Constance graduated from the Television and Radio Broadcasting Program at Canadore College in 1983.
Aug 1, 2017
Spread the love

Toronto – A Norwegian far-right group calling themselves Fatherland First, has been publicly shown up on social media after posting a picture of dark empty bus seats on a public transport vehicle, which they mistakenly identified as women wearing burkas.

The picture was accompanied by adjectives such as “scary,” “tragic,” and “frightening.” Other group members commented immediately, writing “It looks really scary,” to describe the dark image, “should be banned. You can never know who is hiding under there. Could be terrorists with weapons.”

Another of the group’s membership bemoaned the “frightening times we are living in,” urging the imagined Muslim extremists to “get out” of Norway.

In an interview with online news agency, Nettavien, the man who exposed the fake news post, labour politician Sindre Beyer, described his self-declared mission to monitor the group’s online activities:

“I’m shocked by how much hate and fake news is spread there. The hatred that was displayed toward some empty bus seats really shows how much prejudices trump wisdom,” Beyer said.

He added, “That’s why I shared the post so that more people can see what is happening in the dark corners of the web.”

According to the same source, Rune Berglund Steen, in charge of the Norwegian Centre Against racism, agrees with Beyer:

Urging cooler, more rational heads to prevail, Steen added “The buses aren’t full of creepy Islamists and neither do they typically have so many empty seats.”