Rabat - Leader of Justice and Development Party (PJD) and former head of government, Abdelilah Benkirane, has once again addressed the issue of the party’s current status following the upheavals of recent months which have seen the PJD’s influence in Moroccan politics wane. 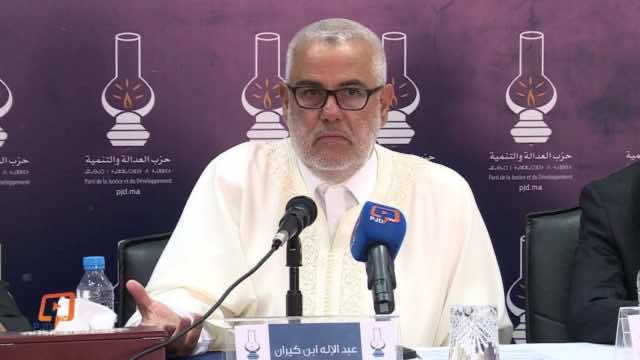 Rabat – Leader of Justice and Development Party (PJD) and former head of government, Abdelilah Benkirane, has once again addressed the issue of the party’s current status following the upheavals of recent months which have seen the PJD’s influence in Moroccan politics wane.

‘In life, you can’t always win,” said Benkirane during a meeting with the PJD’s members abroad on Saturday. “Our rivals are not throwing up hands.” He added that “Democratically, we defeated them. But they had to try to beat us in away or another.”

Benkirane was making a clear reference to the PJD’s victory in the general elections of October 2016 when the Islamists won 125 seats. Still, despite that unprecedented victory in the history of Moroccan elections, the party could not form the coalition it wanted.

After months of unfruitful negotiations with other parties, Benkirane was dismissed by King Mohammed VI in Marchand the current Head of Government and President of the PJD’s national council, Saad Eddine El Othmani, was appointed in his place. The coalition formed by El Othmani, comprised of six parties, had previously been rejected by Benkirane.

In addition to the disappointing outcome of the government coalition and the unpopular management of the crisis in the Rif region, internal divisions within the Islamist party grew.

Despite criticism, however, the PJD still proclaims its “reformist” agenda. On Friday, during the national convention of Attajdid Atolabi, a student union with close ties with the PJD, El Othmani stated his government party will follow in the foot steps of Benkirane’s government (2011-2016) in pursuing reform. The same discourse was echoed by Benkirane on Saturday. The Islamist leader said the reason they are engaged in politics is to enforce reforms.

“Did we achieve something or not? If we didn’t, why Moroccans voted for us?” he asked.

Despite the fact that the PJD, and especially its leader, retain some popularity among Moroccans, many members of the party are worried that the increasingly unpopular PJD-led government will gradually make the party lose its previous achievements.