Rabat - Mustafa Salma Ould Sidi Mouloud, a Polisario Front dissident and former police chief in the Tindouf camps, has once again taken aim against the organization’s leadership, accusing it of being more preoccupied with personal power than seeking a solution to the decades-long conflict.

Rabat – Mustafa Salma Ould Sidi Mouloud, a Polisario Front dissident and former police chief in the Tindouf camps, has once again taken aim against the organization’s leadership, accusing it of being more preoccupied with personal power than seeking a solution to the decades-long conflict.

In a post on Facebook, Salma explained how Polisario has lost influence in the conflict since the ceasefire agreement in 1991, and that, since then, Algeria has come to sustain the dispute from the eastern side of the security wall.

“The Polisario Front had influence in the Sahara conflict during the 1970s and 1980s with its military actions, and the support it received from Algeria, Libya, and other countries of the Eastern Bloc,” he wrote.

“Still, it could not defeat Morocco militarily because of the power imbalance between them. The continuity of war would have represented a threat to the security of the region and undermined the interests of multinational corporations and super-powers.”

That is why, Salma continued, Polisario ceased since then to be an active player in the conflict, while Algeria became a “guardian” of the ceasefire and the international party responsible “for any shot fired by Polisario.”

Algeria, the former police chief in the Polisario-run camps explained, “is not affected by conflict.” Humanitarian support to the camps is guaranteed by the international community, while Algiers is assured, in exchange of ensuring that Polisario does not take up arms again, that no solution that goes against its interest will be imposed by the international community.

“I ask the reasonable people among Sahrawis,” wrote Salma. “Do you realize that since the ceasefire you have no influence anymore?”

Salma said that the organization’s leaders are well aware of this, which is why “they have been busy ensuring their future and and that of their families.”

But, the Polisario dissident asked, “What about the dozens of thousands of poor people who have been living in the camps for decades?” 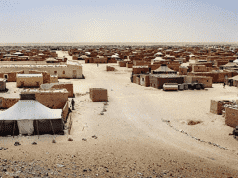