Rabat - The Jamaican track and field legend Usain Bolt has ended his career in the least desirable way.

Rabat – The Jamaican track and field legend Usain Bolt has ended his career in the least desirable way.

An injury coupled with the loss of race of the men’s 4×100 relay  during the World Athletics Championships in London.

The race was the last in Bolt’s marvelous career that saw him create history becoming the most decorated sprinter with 22 medals in Olympics and World Championships, 19 of them gold.

Bolt was the fourth sprinter in his team. As he received the final baton, the Jamaican legend started running in hopes of winning a final good-bye medal.

But, as soon as he started, he stopped fell to the ground in pain, suffering cramps on his left hamstring. He remained down until he was helped by his teammates to get up.

Despite the unfortunate ending, the Jamaican sprinter remains one of the greatest athletes in sports history. 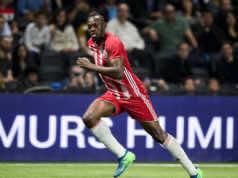