Rabat - At least thirteen were left dead and several injured in an alleged terrorist attack in Barcelona this Thursday evening, as a van plowed into a crowd of people near the popular tourist area of Las Ramblas. Catalan authorities have said that two armed men left the crash scene and entered a restaurant, with the sound of gunfire reported. 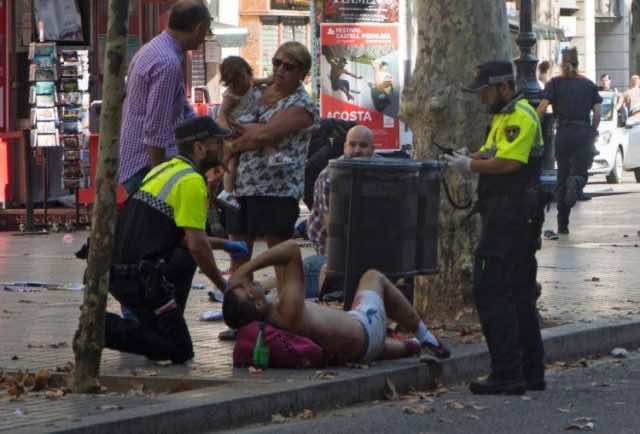 Rabat – At least thirteen were left dead and several injured in an alleged terrorist attack in Barcelona this Thursday evening, as a van plowed into a crowd of people near the popular tourist area of Las Ramblas. Catalan authorities have said that two armed men left the crash scene and entered a restaurant, with the sound of gunfire reported.

“Massive collision on the Ramblas of Barcelona led by a person in a van, several wounded,” said the communication service of the Mossos d’Esquadra, the Catalan police. The area was closed by a security cordon, and five ambulances and police officers were on site, the AFP correspondent said.

Catalan authorities have described the incident on Twitter as a “massive crash,” and emergency services said people should not go to the area around the city’s Placa Catalunya and have requested the closure of nearby train and metro stations.

El Pais newspaper said the driver of the vehicle had fled on foot after running down “dozens” of people. Soon after, two armed attackers entered a bar on Tallers Street and are holding people hostage, reported local media, with gunshots reportedly having been heard inside a shop.

Barcelona Police have confirmed that the shocking incident in Las Ramblas, a busy tree-lined promenade in the center of the city, was in fact a terror attack.

Catalan police are still hunting for the driver of the van after he jumped out of the vehicle and fled on foot.

The Spanish police has recommended that local people use social networks to reassure their loved ones and say they are “OK”. It has announced that a police device was set up on the Ramblas and the Place of Catalonia.

A witness described the situation to local media the situation as “very tense” and said that all surrounding shops are being evacuated. The witness said at least eight ambulances were at the scene.

Spanish Prime Minister Mariano Rajoy tweeted: “In contact with all administrations. Priority: tend to the injured in Las Ramblas and facilitate the work of security forces.”

Footage shot from overhead showed terrified pedestrians screaming as they ran away from the scene, while others taken in the aftermath show at least five or six people lying on the floor covered in blood.