Rabat - Betsy Allen took her mission to help a 20-year-old Moroccan suffering from clubfoot to heart. After years of persistent effort and patience from the American teacher, the young man traveled all the way from Morocco to the United States for a much-needed medical operation. 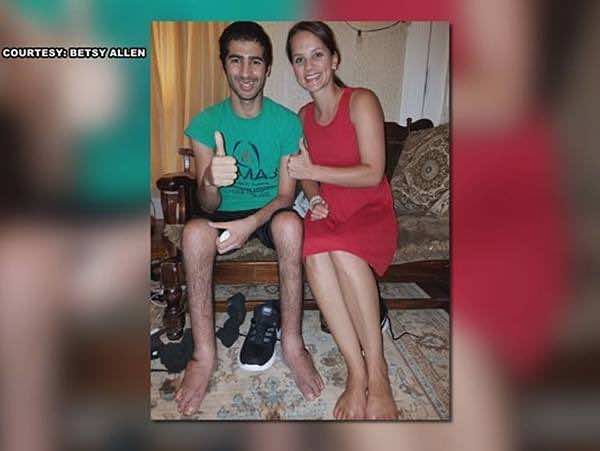 Rabat – Betsy Allen took her mission to help a 20-year-old Moroccan suffering from clubfoot to heart. After years of persistent effort and patience from the American teacher, the young man traveled all the way from Morocco to the United States for a much-needed medical operation.

Allen came to Morocco in 2013 to work as a teacher in Casablanca’s Sidi Moumen district, during which she met Abdelkhalek El Malyani. The young man was suffering from clubfoot, a congenital deformity that forced him to walk on the edge of his feet, which made his movements “incredibly painful and difficult,” said American news website WCSH.

Four years ago, Allen promised to help El Malyani, a promise she never broke. “I felt like I had to do it for him,” she said.

To make his recovery possible, Allen reached out to Shriners, a non-profit organization, which agreed to pay for all of El Malyani’s medical expenses at their hospital in Springfield, Massachusetts, reported WCSH.

Through a GoFundMe page, Allen also received generous support from family, friends, and people all across the state of Maine, while Anah Shriners in Bangor also helped through paying for travel and lodging expenses.

Having had his travel and medical expenses covered, El Malyani flew to Shriner’s Hospital in Springfield for his first appointment.

While club foot cases are usually treated during the first months of birth, El Malyani had to live with it his entire life, making his recovery “a process and not an event,” said Dr. Drvaric at the Shriner’s Hospital in Springfield to the American news outlet. “It’s going to take time to get everything lined up to be able to do all this and for him to recover.”

“He is kind of scared because it’s the first time it his life that he’s going through surgery,” said El Malayni’s friend Youseff Mezzaoui, who also travelled to the US to assist in translation. Yet, the presence of Allen and a support group made the young man less worried about the surgery.

After many surgery and therapeutic sessions, El Malyani is now able to walk on the soles of his feet.

“You know this is something I wanted to do for him. I felt like I had to do it for him,” she said on her personal blog.

The young man has been learning English and plans on continuing studying the language once back home, Allen told WCSH, adding that “he can go back now with his head held high and really contribute to his society.”