Rabat - The Moroccan consulate in Tarragona, 82 kilometers southern Barcelona, has been attacked by splattering blood on its premises on Friday. 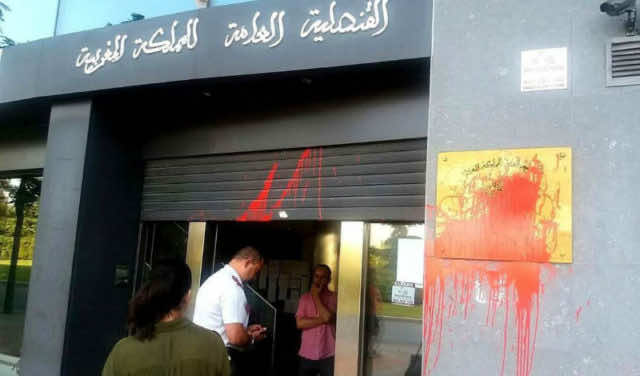 Rabat – The Moroccan consulate in Tarragona, 82 kilometers southern Barcelona, has been attacked by splattering blood on its premises on Friday.

A picture shared on Twitter shows the building of the Moroccan consulate stained with blood, a clear threat against Moroccans in Spain.

The #Moroccan consulate in #Tarragona was targeted by a racist attack using blood on its wall#barcelonattack#barcelonaatentado pic.twitter.com/m9dsPclRWE

Meanwhile, an article by the Spanish press agency EFE published by ABC online reported that the city’s mosque was the target of a similar attack.

On the mosque’s wall death threats were painted with a message that reads “Vais a morir putos moros” (You’re going to die you f…ing Moroccans’’.) In Spanish parlance, the word “moros” refers generally to Moroccans.

The two incidents came after the two attacks in Barcelona on Thursday night and Cambrils in the early hours of Friday.

In Barcelona, a terrorist attacked a large group of people with a rented van, causing the death of 13 people and injuring almost 100.

A Moroccan young man of 28, identified as Driss Oukabir, handed himself in police, claiming his 18 years old younger brother, Moussa, stole his identity and drove the car.

In Cambrils five suspected terrorists were gunned down by police officers during a patrol operation.

The two attacks have renewed fears of reprisals against the Muslim community in Spain and probably elsewhere in Europe.