Rabat - A 22-year-old Belgian woman accused of extremism was arrested in Greece under a Europol arrest warrant, said Greek coast guards and Greek News Agency (ANA) on Saturday. The same source claims that the suspect could be of Moroccan origin.

Rabat – A 22-year-old Belgian woman accused of extremism was arrested in Greece under a Europol arrest warrant, said Greek coast guards and Greek News Agency (ANA) on Saturday. The same source claims that the suspect could be of Moroccan origin.

“A 22-year-old foreigner was arrested because of alleged links with terrorist activity,” a spokesman for the coast guard told French News Agency (AFP) adding that the suspect is detained in the island of Corfu.

The authorities refused to identify the nationality of the suspect but the ANA indicated that she is Belgian of Moroccan origin.

The woman, who previously was in Italy, had taken a ferry from Italy to the Greek port of Igoumenitsa, according to ANA.

She was arrested Friday night in Corfu after an alert given by the Italian authorities to their Greek counterparts, according to AFP. 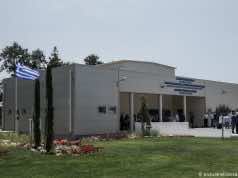