Rabat - King Salman of Saudi Arabia has spent USD 100 million during his month-long summer holiday in Tangier, reports The Independent.

Rabat – King Salman of Saudi Arabia has spent USD 100 million during his month-long summer holiday in Tangier, reports The Independent.

The British media source added that the Saudi King’ spending is expected to account for “1.5 percent” of Morocco’s foreign tourism revenue.

The Saudi king arrived in the northern coastal Moroccan city on July 24.
His visit was described by the Spanish newspaper La Vanguardia as an “economic relief” to the city.

Several media outlets reported that over 1,000 people had accompanied him. With the huge number of his companions, several luxury hotels and car renting companies benefited from the King’ stay in Tangier.

His visit this year was also politically significant, coming soon after Morocco and Saudi Arabia diverged over the crisis in the Gulf. While Saudi Arabia led a blockade against Qatar, Morocco chose to remain neutral in the tension between its two Gulf allies.

The Saudi boycott of Qatar was slightly alleviated when King Salman, from his Tangier residency, gave orders to open borders with Qatar to allow its pilgrims to perform the annual Hajj.

Earlier in August, King Mohammed VI paid a visit to his Saudi counterpart, demonstrating strong relations between the two kingdoms despite their differences regarding the Qatar crisis. 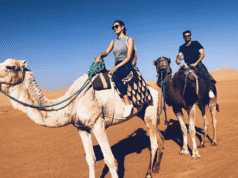