Rabat - Mozambique has shown its support for the Polisario Front in a markedly undiplomatic way. 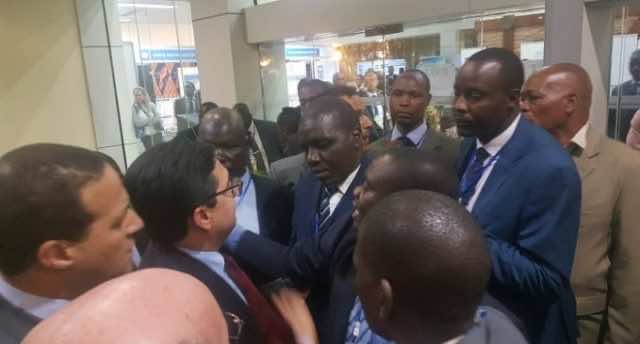 Rabat – Mozambique has shown its support for the Polisario Front in a markedly undiplomatic way.

On Thursday, the country, long known for being a staunch supporter of the separatist group, literally forced Polisario into a meeting of the Tokyo International Conference of African Development (TICAD), held in Mozambique’s capital, Maputo.

The self-proclaimed Sahrawi Arab Democratic Republic (SADR) did not have the right to participate in the meeting, as the entity is neither recognized by Japan nor by the United Nations, a co-organizer of the event.

A Youtube video shared by TelQuel shows the Mozambique authorities confronted by Moroccan and Japanese officials while they to access the conference room.

Meanwhile, the Moroccan delegation had to fight for its right to get into the room, despite being an official delegation to the conference. As the video shows, the tense scene occurred in front of a door-sign saying, “No Badge, No Entry.”

The Head of Moroccan delegation, the Minister of Foreign Affairs Nasser Bourita, is seen in the footage verbally fighting his way through the Mozambique security wall, and standing at the meeting room’s door, waiting for other members to join him.

Mozambique’s forceful attempt to get Polisario into the meeting against the will of the Japanese delegation came after the SADR officials, including their Minister of Foreign Affairs, Mahfoud Oul Saleck, were denied entry into the meeting.

Inside the meeting room, the Mozambique delegation gave the Polisario members their seats, as they had no place to sit.

Even though the meeting was held with the presence of the Polisario members, the Japanese delegation reminded the attendees that the meeting was destined only for “African countries recognized by Japan.”

At the end of the meeting, the Polisario members saw themselves excluded from the group photo.

The incident recalls a similar one in Saint Lucia in May, when a Moroccan ambassador was physically assaulted by Soufiane Mimouni, a high ranking official at the Algerian Ministry of Foreign Affairs, during a meeting of the United Nations Decolonization Committe. The assault was confirmed by both local police and a medical report.

Algeria is Polisario’s main ally and sponsor, and whenever the separatist group’s presence in an international meeting is contested by Morocco, heated arguments tend to ensue.

For Moroccan observers, the incident provides further evidence that, while the kingdom’s diplomats prefer to remain professional and composed, Polisario and its allies will quickly rely on force when they are short of arguments.