Rabat - Marrakech will host on January 2018 a high-level regional conference on promoting economic growth, employment, and inclusion in the Arab world. 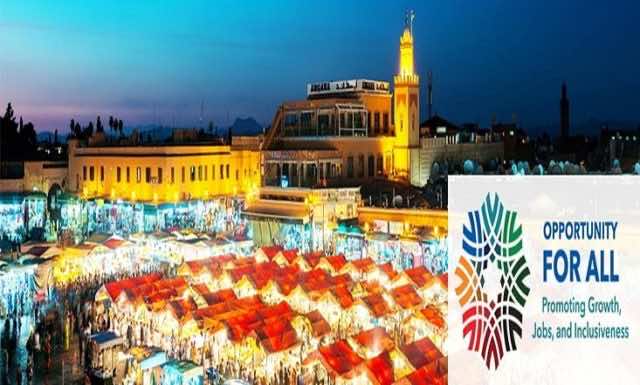 By
Chaima Lahsini
-
Chaima Lahsini is freelance journalist and activist with the Al-Fam collective in Rabat.
Aug 27, 2017
Spread the love

Rabat – Marrakech will host on January 2018 a high-level regional conference on promoting economic growth, employment, and inclusion in the Arab world.

Organized by the International Monetary Fund (IMF), the Arab Monetary Fund (FMA), the Arab Fund for Economic and Social Development (FADES), and the Moroccan government, this event will take place on January 29 and 30, 2018.

Entitled “Opportunities for All: Growth, Employment and Inclusion in the Arab World,” the conference will include a number of senior officials, business leaders, academic representatives as well as representatives of civil society from the Arab world and other regions.

In a statement, the IMF said that this event builds on the 2014 Amman conference “Building the Future”, which highlighted the need for an all-inclusive and job-generating growth.

According to the international financial institution, “this new meeting is now aimed at orienting the debate related to inclusive growth in the Arab world.” For two days, participants will exchange experiences, lessons, and ideas on how to create millions of jobs through the development of new households and growth sectors, added the same source.

“Reflections will focus on ways to increase opportunities for women and young people by promoting innovation and entrepreneurship; promoting transparency and technology to exploit the region’s potential; and the definition of policies conducive to stronger and more inclusive growth,” the IMF explained.

The event will highlighted by speeches addressed by different personalities including IMF Managing Director Christine Lagarde and the Director General of the FADES Board of Directors, Abdelatif Al-Hamad, and the FMA’s Chairman and Chief Executive Officer, Abdulrahman Al Hamidy.

According to recent IMF projections, growth in the Middle East, North Africa, Afghanistan, and Pakistan region is expected to slow down significantly in 2017. The downturn in activity in oil-exporting countries would be the main cause of this situation, the organization said after updating its published forecasts at the beginning of the second quarter of 2017.

The IMF pointed out that this situation might lighten up by next year, adding that its projections for 2017-18 would remain broadly unchanged from the April 2017 World Economic Outlook. However, growth results in 2016 seem to have been much stronger due to the accelerated growth in Iran. The IMF adds that if the recent downturn in oil prices were to continue, it could have a greater impact on the outlook for crude oil exporters in the region.

For its part, World Bank analysts said economic growth in the Middle East and North Africa (MENA) region are expected to decline this year by 2.1 percent. Meanwhile, the forecasts of the Bretton Woods institution, published in its biannual report on the world economic outlook, expect growth in the region to accelerate by 2.9 percent in 2018, assuming an easing of geopolitical tensions and a rise in oil prices.