Rabat - Three months after the initial agreement on Morocco's accession to ECOWAS, a delegation of the subregional organization has been welcomed in Rabat by the Minister of Foreign Affairs, Nasser Bourita, in order to take stock of Morocco’s application for membership. 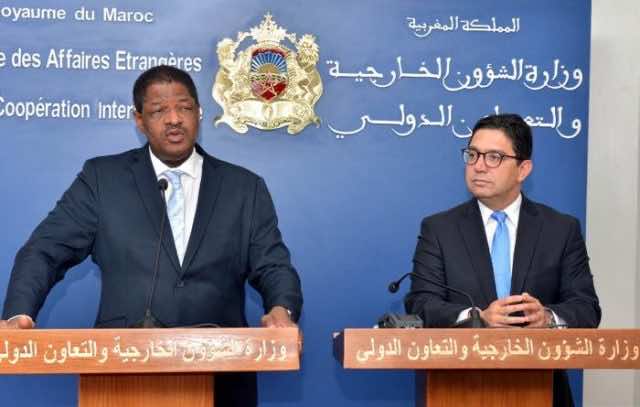 Rabat – Three months after the initial agreement on Morocco’s accession to ECOWAS, a delegation of the subregional organization has been welcomed in Rabat by the Minister of Foreign Affairs, Nasser Bourita, in order to take stock of Morocco’s application for membership.

The legal and technical provisions are underway to enable Morocco to become a full member of the Economic Community of West African States, confirmed Marcel Alain De Souza, the chairman of the commission, on Tuesday. “The approach of Morocco’s accession to ECOWAS is on the right track and will be confirmed at the next ordinary session of the Community on December 16 in Lomé,” he said, reports the Maghreb Arab Press (MAP).

De Souza stated that the general principles of acceptance of Morocco’s membership are generally respected by the kingdom, and that “this decision will cover the free movement of goods, services, people and capital, the implementation of risk prevention agreements, the implementation of the rules of good governance and democracy.”

For the ECOWAS chairman, “this means legal and diplomatic provisions to complete the treaty and Morocco will become a full member,” stressing that it is a lifelong commitment: “it is a marriage without brexit, without divorce, so it must be well prepared.”

During his meeting with Bourita, De Souza revealed that King Mohammed VI had in an official letter expressed the commitment of Morocco to adhere to a single currency with the West African economic community if it is decided upon by the member states.

For De Souza, this demarch may take up to ten years. He recalled that the kingdom is “already very historically linked economically, bilaterally with almost all of the 15 countries of West Africa.”

Morocco will also have to “adhere to a trade liberalization scheme and to the common external tariff of ECOWAS, which counts 340 million consumers,” explained the chairman. In the long term, De Souza estimates that it will be necessary “to harmonize the 6,000 tariff lines available to the ECOWAS and the 17,800 tariff lines of Morocco.”

The minister explained that this means that there is “no manual, and that it is necessary to be ingenious and flexible, while keeping in mind the fundamentals and achievements of ECOWAS.”

A radical change of heart

Initially reticent about Morocco’s accession to the ECOWAS, De Souza seemed to have changed his mind, stating that “we are in a very good atmosphere … the different elements show a convergence of views of our Heads of State and HM the King so that we can settle in the long term, in the development and in the interests of both parties.”

The statements appear as quite the change of position on his part, as in March he had qualified the admission of Morocco in the ECOWAS as a “problem” which risked “setting a precedent since Chad had taken the same steps.” De Souza explained at the time that “we will run up against the text of the African Union that divided the continent into five regions as the Regional Economic Commission. The King says where the West stops? So do we have to extend the West to the North?”

These concerns – to not say obstacles – expressed at the time were reminiscent of those drawn up by former President of the Commission of the African Union, Zuma, with the difference that in the case of Souza’s, his were expressed in a subtler and more diplomatic tone.