Rabat - Hafid Deradji, an Algerian Sports Commentator has reaffirmed-yet again- that Morocco will be the official host of the 2019 Africa Cup of Nations.

Rabat – Hafid Deradji, an Algerian Sports Commentator has reaffirmed–yet again– that Morocco will be the official host of the 2019 Africa Cup of Nations.

The commentator has publicly addressed this information as he was commentating on Saturday’s 2018 World Qualifier game between Algeria and Zambia. Zambia beat Algeria  3-1.

Deradji said that Cameroon has not and cannot have six stadiums within six months in order to host the 24 participant teams. “Therefore, Cameroon cannot host the African competition.”

“Morocco, however, has six and ten and 12 stadiums, which made it eligible to host the African competition and even the FIFA World Cup competition,” said Deradji.

He continued that “the proof is that Morocco’s candidacy to host the 2026 World Cup has officially been submitted.”

In July, Deradji said the Confederation of African Football will soon announce Morocco as the official host of the 2019 Africa Cup of Nation (CAN).

While Cameron has been experiencing delays in the execution of various Nations Cup infrastructural projects, Morocco expressed its interest in replacing the country in order to host the African football competition instead.

Fouzi Lekjaa, the newly appointed third vice president of the Confederation of African Football, stated in July that Morocco is ready to replace Cameroon as the host of the 2019 African Cup of nations in case the latter is unable to host it due to “lack of capacity.”

Abderrazak Hamdallah: ‘Dream to Represent Morocco Will Have to Wait’

Africa Cup of Nations to Use VAR From Quarter Finals Onwards 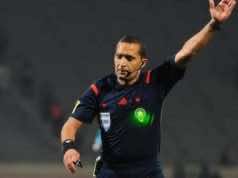 2019 CAN: Egypt, Senegal Are Renard’s Favorites to Win