Rabat- Residents of a village in the northern region of Chefchaouen took justice into their own hands, catching two accused thieves who were reportedly beaten up. 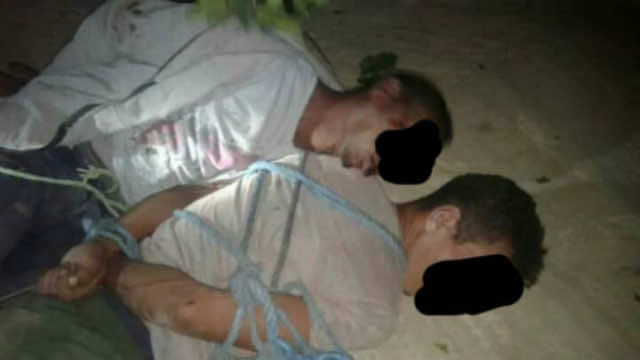 Rabat- Residents of a village in the northern region of Chefchaouen took justice into their own hands, catching two accused thieves who were reportedly beaten up.

Recalling previous similar incidents, the video raises questions about the fairness and efficacy of such “civilian policing”.

The video surfaced online Sunday, in which two apparent thieves are seen tied up, after having apparently received a beating, with bruises visible on their faces in a close-up shot taken from the video.

According to local residents, the two burglars broke into a house in the village in Bab Barred, near Chefchaouen.

The attempted robbery took place at night. According tomedia reports, the two burglars,from the city of Sidi Kacem, attempted to rob was a man living by himself. The man, with the help of neighbors whomhe called on the phone, managed to get the burglars apprehended.

Before the village’s residents called the local Gendarmerie, they beat and humiliatedthe burglars, documenting the incident with their phones.

People taking policinginto their hands has become a controversial subject in Morocco.

While many have saluted citizens who take action to prevent other people getting robbed, others havevoiced concerns about the dangers of vigilante behavior.

In 2015, a young man caught stealing in Casablanca lost his sight after being beaten up by a crowd.

Such extrajudicial“policing”isseen by some as an infringement on individual liberties, as was the case in previous incidents whenindividuals identified as gay were assaulted in the street or in their homes. In 2016,a mob in Beni Mellal stormed a house and assaultedtwo gay young men inside, filming the incident.