Rabat – The Hassania School of Public Works’ (EHTP) Enactus team will represent Morocco in the Enactus World Cup, the world’s largest social entrepreneurship competition, which is taking place September 26 to 28 in London.

The EHTP’s Enactus team will go to the World Cup after winning the title of national champion for second consecutive year, at the Moroccan national competition on June 20, according to a statement by Enactus Morocco.

The Enactus World Cup brings together an international network of student academic and business leaders to showcase entrepreneurial action and shared innovation that intends to transform lives and create a better future.

In the student competition, representatives of the participating countries present the benefits and impacts of their projects to more than 300 judges representing leading multinationals in different sectors.This year, Morocco will participate with three green businesses.

Mistomar is a circular buried structure of 14 cubic meters, whose architecture andconstruction materials allow it to function as a cold room designed for preservation of agricultural products for periods of up to six months.

Com’pom is a project aiming at taking advantage of apple sur plus in the M’semrir region thorough the manufacture of products derived from applesauce.

Ecodome is a “revolutionary” project that aims to develop a new construction material, which consists of the stacking polypropylene bags filled with a mixture of natural dirt and cement. Using this method will lead to large savings compared to the traditional methods, with 50 percent of normal construction time and 70 percent of energy balance.

In previous editions, Morocco has qualified several times for the finals or semi-finals.

Enactus Morocco 2017 is an  another year of accompanying 4,000 students across Morocco, having developed over 250 projects benefiting more than 195,000 beneficiaries throughout the country, according to the statement.

Enactus Morocco is supported by the OCP Group and the OCP entrepreneurship network program of the OCP Foundation. 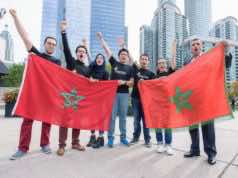