Rabat - Rabat’s Higher Institute of Information and Communication (ISIC) hosted a workshop for local journalists on Tuesday addressing stereotypes about refugees and migrants in the Moroccan press.

Rabat – Rabat’s Higher Institute of Information and Communication (ISIC) hosted a workshop for local journalists on Tuesday addressing stereotypes about refugees and migrants in the Moroccan press.

Representatives of Moroccan and international organizations, including the Office of the United Nations High Commissioner for Refugees (UNHCR), the Moroccan Organization of Human Rights (OMDH) and Morocco’s International Organization for Migration (IOM) gathered to discuss the impact of media attitudes toward migrants and asylum seekers and learned the readers form their impressions through media coverage.

The workshop was organized with the aim of introducing Moroccan journalists to a series of approaches to covering sensitive issues on migrants and refugees without using “inaccurate” terminologies, which might affect the public opinion’s perceptions.

Cavalieri also underlined the need for accurate and fair representation. “The Moroccan media has to showcase positive images about the refugees in order to fight against prejudices, which represent refugees as beggars or parasites and tarnish the image of refugees in Morocco,” the
UNHCR representative explained to MWN.

For example, “there is a mix of migrants and refugees in Morocco […] it is important to differentiate between the two categories,” Cavaleri said.

According to the UNCHR, “refugees are people who flee armed conflict or persecution. Those people cross borders to seek protection and safety in nearby countries, and thus become internationally recognized as refugees with access to assistance from states, UNHCR and other organizations.”

Amin stressed that the countries receiving refugees must protect them, and that once a refugee crosses a border, the hosting country is obliged to offer them rights and protection.

Meanwhile, migrants are people who choose to leave their mother country “not because of a direct threat of persecution or death, but mainly to improve their lives by finding work, or in some cases for education, family reunion or other cases,” according to the UNHCR.

Boubkeur pointed out that Morocco and the UNHCR have been working together since 2007 to protect the rights of refugees across the world, while Cavalieri praised Morocco’s willingness to take in refugees.

“The most important thing for refugees, who lost everything they have in their homelands across the world, is protection, and this is what is good about Morocco: protection being provided to refugees,” the UNHCR representative told MWN.

“The biggest challenge facing refugees is finding a place where refugees’ families can be offered protection, and then an opportunity to work and become self-sufficient so parents are not obliged to send their children to beg for money in traffic lights or force their underage daughter to get married,” Cavalieri added.

“We are grateful for the Moroccan government to have allowed refugees to be able access legal labor markets.” 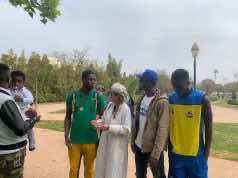