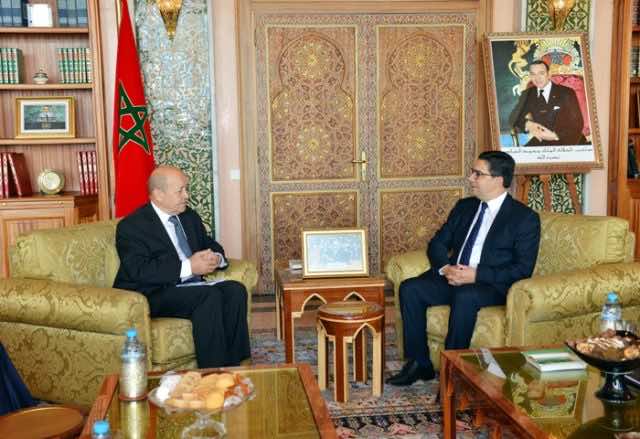 The former Minister of Defense met with El Othmani on Monday morning in the government presidency, as well as with his Moroccan counterpart Nasser Bourita.

While no details of the two meetings have emerged yet, the French Ministry of Foreign Affairs indicated that Le Drian’s visit aims to build upon French President Emmanuel Macron‘s visit to Morocco on June and further strengthen relations between the two countries.

The ministry described partnership between Paris and Rabat as “exceptional,” adding that Le Drian came to Morocco to talk about issues of common interest for both governments such as the fight against terrorism, climate change, management of migration influx, and cultural cooperation.

The French ministry also called Morocco a “strategic partner for peace and stability” in the region.

“With its return to the African Union and its plan to join the Economic Community of West African States, Morocco plays a growing role in Africa,” said the ministry, noting that cooperation in Africa is a critical issue for Morocco and France.

France is Morocco’s second client with Euro 4.2 billion worth imports and its second supplier with Euro 4.2 billion exports in 2016. Several major French companies are operating in Morocco and some were attributed contracts of key projects such as the High Speed Line train linking Casablanca and Tangier.

Economic relations were also on the agenda of Le Drian in his visit to the kingdom.

French Prime Minister Edouard Philippe is expected to pay a visit to Morocco in November, while President Macron is set to come back for a second visit before the end of the year as part of a tour of the Maghreb.