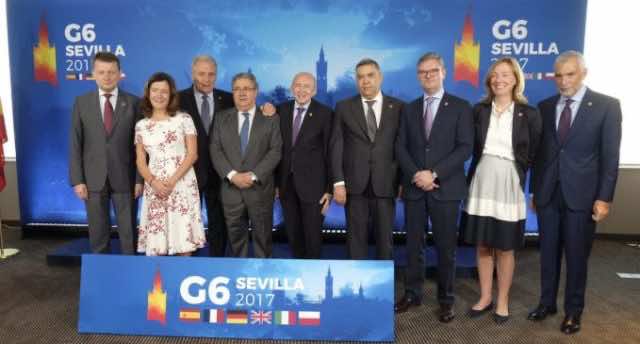 Rabat – In the wake of the terrorist attacks in Barcelona in mid-August, a European security summit is being held today, October 16 in the southern Spanish of city Seville, with the participation of the Moroccan kingdom as an observer state.

The summit intends to negotiate new international measures aiming to fight terrorism carried out by jihadist groups and to counter security challenges said to be posed by the influx of refugees.

The G6 summit has brought together German, French, British, Spanish, Italian, and Polish interior ministers in Spain, in addition to other observer states from the European Union, the United States, and Morocco represented by its interior minister Abdelouafi Laftit.

Spanish Minister Juan Ignacio Zoido stressed the “importance” of Morocco’s participation in the summit, given its successful strategy in countering terrorism and illegal immigration in the region, reports the Spanish press agency Europa Press.

Morocco is participating partly as a result of the recent terrorist attacks in Barcelona carried out by 11 European jihadists of Moroccan descent, which prompted the members of the summit to transfer the event, originally to be held in Poland, to Seville, reports the Spanish daily.

To combat terrorism, measures have been taken this morning. Zoidi announced that the G6 has decided to strengthen the control material used to make explosives and to improve access “to the communication data, maintaining a balance between privacy and security,” says Europa Press.

The Spanish minister also presented the migratory pressure as “the permanent concern of the EU.” He presented a series of “proper legal mechanisms and procedures” to establish “regular” migration, so that immigrants “are neither victims nor prey of networks and mafias dedicated to illegal trafficking of persons,” said Europa Press.

The minister added that the policy implemented between Spain and Morocco in recent years had produced “a very satisfactory result.”

On the sidelines of the G6 meeting, Laftit will hold a tete-a-tete with his French counterpart Gérard Collombto discuss security and counter-terrorism cooperation between Rabat and Paris, reports the media outlet Atlas Info.