Rabat – While the Harvey Weinstein affair stirs the media, a campaign has taken over Facebook and Twitter, urging people to speak out against sexual harassment or assault using the hashtag #MeToo. 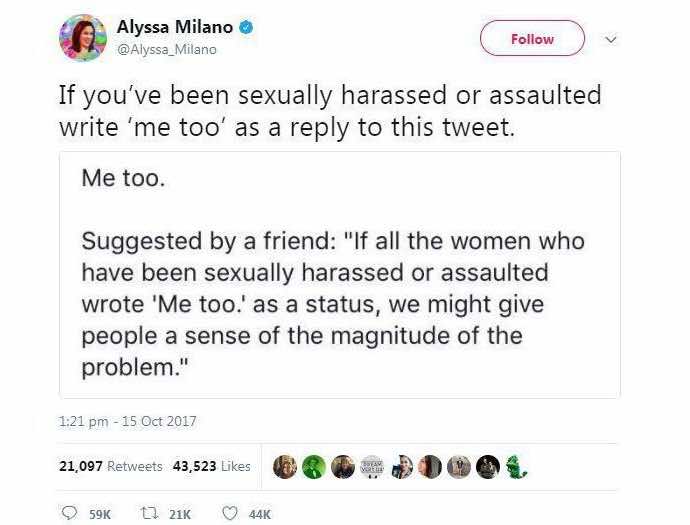 Launched at the initiative of the American actress, Alyssa Milano, who tweeted on Sunday a note that read “Suggested by a friend: ‘If all women who have been sexually harassed or assaulted wrote ‘Me too’ as a status, we might give people a sense of the magnitude of the problem.’”

Tens of thousands of people, mostly women, have replied to her requestusing the hashtag #MeToo to show people just how widespread sexual harassment and assault are in their lives.

Alongside the hashtag #MeToo, many women across the continents have shared their personal experiences as victims.

The initiative has met a tremendous echo. More than 650,000 tweets have used the hashtag, along with the more than 12 million posts, comments, and reactions that flooded Facebook since Sunday, reports ABC News.

The move came out as a response to the accusations against American producer Harvey Weinstein of rape, assault and sexual harassment made by many actresses.

The Hollywood producer,who has since announced that he went to rehab to cure his “sex addiction,” is no longer on the list of voters at the Oscars. France announced withdrawing his Legion of Honor and Deauville has erased his name from one of his famous cabins.

The “Charmed” actress isn’t the first to launch such a campaign, like that which already swept the French web with the hashtag #BalanceTonPorc. (“Denounce your pig”)

In Morocco, women have also spoken out against sexual harassment and many have shared their own stories using the hashtag #MeToo or #AnaAidan, asking their peers to copy and paste the status to highlight the prevalence of sexual abuse against women in Moroccan society.