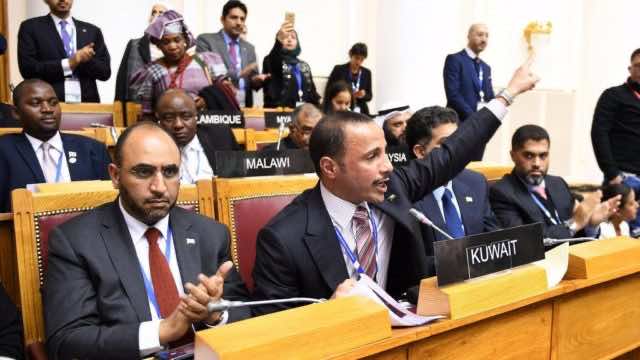 Rabat – Marzouq Al-Ghanim, Kuwait’s national assembly speaker, forced an Israeli delegation to leave a meeting of the Inter-Parliamentary Union held on Wednesday in St. Petersburg, Russia, after describing them as “occupiers” and “child killers.”

Replying to Israeli claims regarding Palestinian prisoners detained in Israeli prisons, Al-Ghanim said that “what the parliamentary representative of this brutal occupation represents is the most dangerous form of terrorism: state terrorism.”

He addressed the head of the Israeli delegation, saying, “If you do not feel shame, then do as you please.”

“You should take your bags and leave this hall. Get out of the hall right now if you have an atom of dignity… you occupiers, child killers,” he shouted, inciting applause from the audience, before the Israeli representative walked out.

Azzam Al-Ahmad, the head of the Palestinian delegation, praised the speech, telling Middle East Monitor that it shined “a light on the wounds Palestinians have suffered.”

The heated speech went viral on social media and was widely praised among Arab Twitter users.

“Let history record the moment an Israeli delegation was kicked out of an international conference in Russia.”

“At a time of changing positions, Kuwait remains steadfast in its religion, Arab nationalism and justice.”

“I swear to God, I rejoiced seeing what this brave man did to the cowardly Zionist delegation that has caused terror worldwide.”

“Honestly, Marzouq al-Ghanim represented Kuwait in the best way, to the point that his political rivals agreed with him.”