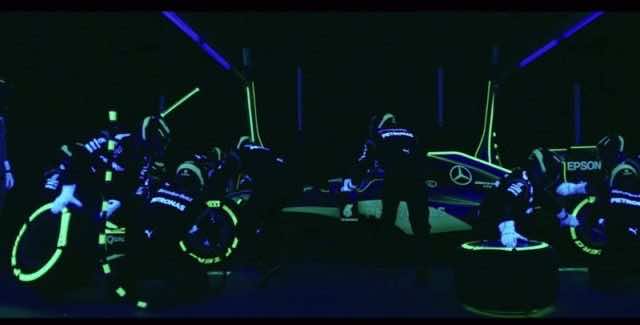 Rabat – Seiko Epson Corporation has announced its partnership with Mercedes-AMG Petronas Motorsport to create the first glow-in-the dark pit stop, said an official statement released by the company on October 17.

Epson began by transforming the Mercedes-AMG Petronas racecar from its normal state into a glow-in-the-dark masterpiece. An Epson SureColor SC-S Series printer enabled the Mercedes-AMG Petronas Motorsport design team to transform the 2016 World Championship winning emblem by printing luminous material that was wrapped around the car and the glow-in-the-dark versions of the car’s iconic branding, said the company.

Ian Cameron, the general manager of brand and communications at Epson said that the partnership with Mercedes-AMG Petronas Motorsport has “always focused on working together in the joint pursuit of innovation and performance in [their] respective industries.”

The manager said that the new pit stop is “both pioneering and exciting. It perfectly demonstrates how adaptable and practical our products are in the most unusual and striking of environments. We are delighted with the results.”

The effect was enhanced by the Epson’s flagship EB-L25000U, “the world’s first and brightest” 3LCD laser projector with 25,000 lumens plus 4K Enhancement, which is designed for dynamic and high-impact production, said the press release.

The concept was designed to encourage Formula One fans to look at pit stops in an entirely new light, while demonstrating the global technology leadership of both Epson and Mercedes-AMG Petronas Motorsport in a compelling manner, said Epson.

The company said that the glow-in-the-dark pit stop is part of a series of “innovative activations” between Epson and Mercedes-AMG Petronas, which includes last year’s #LewisGetsInked campaign and the 2017 Lewis Hamilton F1 Ink Tank Challenge.

“Pit stops are a well-established feature of the Formula One™ experience, so being able to work with Epson and their pioneering products to bring a fresh perspective to this process has been highly exciting,” said Victoria Vowles, Marketing Operations Director, Mercedes AMG-Petronas Motorsport.