Rabat - Traditionally speaking, Moroccan officials embezzled money, took bribes, practiced nepotism and favoritism and abused power in total impunity. Worse many of these “species” did not consider such wrongdoing as criminal acts but rather as privileges that go with their official office, but this is over now, once for all, thanks to the royal activation of the Article 1, paragraph 2 of the 2011 Constitution that stipulates:

Rabat – Traditionally speaking, Moroccan officials embezzled money, took bribes, practiced nepotism and favoritism and abused power in total impunity. Worse many of these “species” did not consider such wrongdoing as criminal acts but rather as privileges that go with their official office, but this is over now, once for all, thanks to the royal activation of the Article 1, paragraph 2 of the 2011 Constitution that stipulates:

“The constitutional regime of the Kingdom is founded on the separation, the balance and the collaboration of the powers, as well as on participative democracy of [the] citizen, and the principles of good governance and of the correlation between the responsibility for and the rendering of accounts.”

Following the Hirak protests in Alhoceima and the arrest and imprisonment of its entire leadership that condemned the marginalization of the city by the authorities, the King commissioned on October 2, 2017 the First President of the “Court of Audits” Driss Jettou to conduct a thorough evaluation and audit of the “Alhoceima: Manarat al-Moutawassit” project.

The findings of the report commissioned clearly established serious dysfunctions in the implementation of this big project initiated by the monarch during the tenure of the previous government led by Abdelilah Benkirane. However, one wonders why the former head of Government Benkirane was not reprimanded by the monarch since the overall responsibility of this serious problem of implementation inefficiency lies with him in the first place.

A communiqué of the Royal Cabinet detailed the dysfunctions in the realization of this important project as follows:

“At the level of implementation of the programmed projects, there has been a significant delay in the launching of projects, and the vast majority of them have not been launched at all, with the absence of concrete initiatives by some of the actors involved in their actual launch,”

From now on officials are on equal footing with the rank and file before the law. Ministers will be sacked if they fail to discharge their responsibilities and this what the monarch did. As such the following ministers are booted out of the government:

The King has also dismissed Ali Fassi Fihri, director general of the National Office of Water and Electricity.

Additionally, the King reprimanded five former ministers incriminated by the report and they will be banned from public office for life:

However, one wonders what led to this important and historical royal decision which many media outlets dubbed as a ” political earthquake” quite rightly or as a “historical decision”. Is it the establishment natural instinct of survival which is a common trait of all humans or the resounding protests of the Hirak that slammed officials for their inefficiency?

Will democracy be jack started as a result? 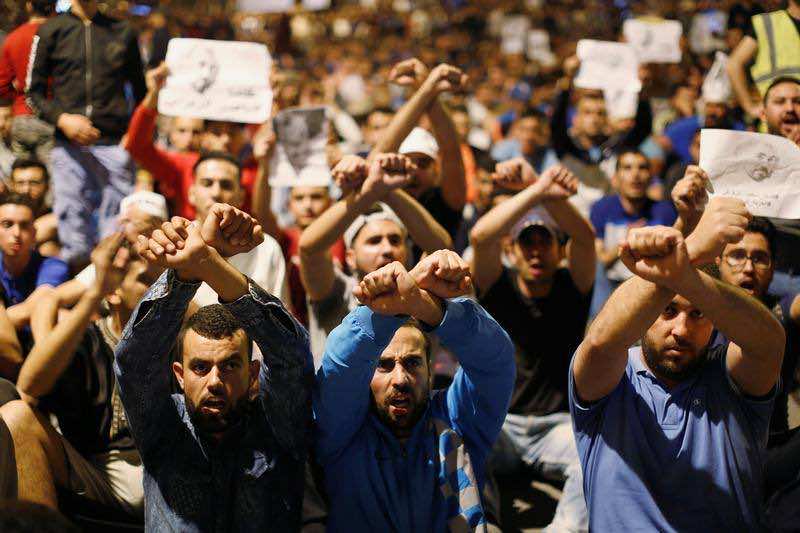 Since the unfortunate terrorist attacks of May 16, 2003, incremental democracy was duly put on the back burner in favor of state security and order.

Nevertheless, the unexpected advent of the Arab Spring of 2011 and the sudden emergence of its Moroccan version “Mouvement du 20 Février” calling for the establishment of a true constitutional monarchy and the end of state of impunity of corrupt officials. This street movement vilified publicly the close entourage of the monarch for corruption, embezzlement, nepotism, favoritism, abuse of public office and power.

Is it the end of tribal and patriarchal political parties?

The Hirak has tarnished the image and reputation of political parties by considering them as mere political back street shops for dealing and wheeling.

This protest movement has forced them on their knees for two salient reasons:

These parties defend staunchly the interests of the tribe members only and not the well-being of the population at large.

These parties require public votes as an obligation dictated by the concept of “respect of seniority” and will give in return nothing, not even respect.

What is more, to add insult to injury, the royal activation of the accountability article gave the coup de grace to the already shaky, not to say moribund parties. The political high cadres of the, hitherto, establishment docile parties like PPS and Mouvement Populaire have been sacked and banned for life from public office.

Will these parties respect the royal will and honor the public discontent and dissolve themselves voluntarily or will they continue to live a life of shame and lack oh honor?