Morocco World News
Home Culture Mustapha Slameur: The art of slam is not a platform for those... 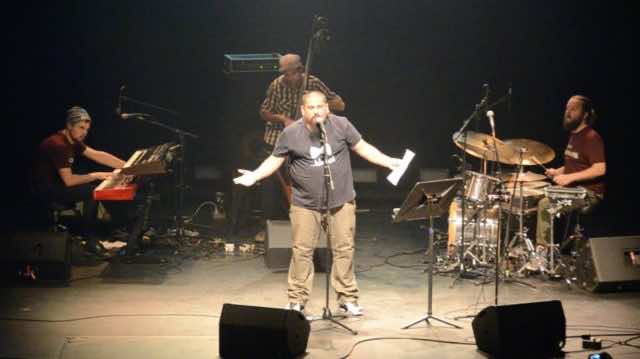 Rabat – Mustapha Boukrouna is an artist whose talent is rooted in several different arts. He started his career as a rapper, then switched to another musical adventure under the name “Steph-Raggaman.” Now, he is the leader of the slam poetry movement in Morocco. He slams in Classical Arabic, Moroccan Arabic (Darija), and also French. He draws his inspiration from his feelings, his everyday life, and reflections on his experiences.

Mustapha Slameur talked with Morocco World News about his career, his views on culture and festivals in Morocco today, and the art of slam in the Kingdom.

Mustapha Slameur: I am married, the father of one child, a high school physical education teacher, an artist, and organizer of slam poetry and spoken word events. I am from Casa Babylon, specifically the old El Mohammadi neighborhood. I have always called it a city that never sleeps and it was a symbol of resistance, art, and consciousness in the 1970s.  Things are different today, as it is now overrun with drug dealers, thieves and all kinds of crime.

Can we consider you the founder of slam poetry in Morocco?

Mustapha Slameur: Slam is a poetic style that [first] appeared in the United States of America. I do not want to be credited as the founder, but I would like to be seen as an influencer; spreading this art in Morocco and the Arab world is one of my main objectives.

Over the past five years, I have participated in 119 workshops for the benefit of the Moroccan cultural associations and cultural organizations that were dedicated to all ages outside and inside Morocco, to promote Moroccan Slam in every international and national cultural event.

How do you see the future of this art in Morocco?

Mustapha Slameur: Slam is not an elitist art. It was founded in Chicago in the early 1980s by Marc Smith to help make poetry understandable and accessible to all people. In Morocco, we have found that all factions of society, people from different backgrounds and social classes, love this type of creativity and meeting in slam cafes to bond over the words without any restrictions or boundaries.

I predict that the future will be bright, but only if the artists can steer clear of the temptations of predatory forces that come in the form of materialism, media, and even politics.  To remain pure, slam should exist without subservience to vanity, money, and political agendas. For example, I receive every year offers and calls from companies to do slam in advertisements to support consumer products, and I refuse every single time on the grounds that this kind of art is not for sale and not a platform for those who seek fame. Although there are a few slam gatherings across Morocco every year, I expect more intensive proliferation in the future. This kind of art is used as a method of pedagogy in schools, foreign cultural centers, and also in prisons. This form of self-expression challenges taboos and plants the values of dignity and freedom in the hearts of young people.

Why did you move from a style like reggae music, which attracts fame and festivals, to an art like slam?

Mustapha Slameur: It was a positive leap for me, both personally and artistically. I was one of the first reggae pioneers in Morocco, and I was able to make 50,000 spectators dance and chant the songs of Steff Raggaman in my concerts. As Mustapha Slameur, I invite fans to listen to my words and consider what poetry means. Learning to grapple with this subtle art is more important to me than selling out venues.

You maintain a strong presence in international slam events in Lebanon, France, Italy, Germany, Canada, Tunisia, and Dubai, but we rarely see you in Morocco.

Mustapha Slameur: This question maybe needs to be asked to the Moroccan‘culture officials (Ministry of culture, and organisers of Moroccan festivals and cultural events) I do not reject the offers made to me nationally. Perhaps the secret of my presence in the big festivals in other countries is that these countries are devoted to leaving space for slam, spoken word, and poetry in general in their annual programming.

The organizers of almost all the festivals of Morocco primarily cater to modern pop, commercial rap, Rai. They bring in the icons of global mainstream music with millions of dirhams for half an hour in order to show the world that we are open to music and coexistence, but there is little effort to share other forms of art, especially from Moroccan artists.

You received an artist card after 17 years of both national and international success! The card is an official recognition by the Ministry of Culture and is supposed to serve its holder as an evidence for the practice of art in cultural institutions and authorities. But there have also been complaints that it is not an effective policy. What is your take?

Mustapha Slameur: I have long desired this card, and it is symbolic to me because I feel that I am recognized as an artist in my country. Of course, art is a lifestyle that is not translated into cards, nor by the number of views, nor how much do you get paid.

The card indeed serves its holder as an evidence for the practice of art in cultural institutions and authorities. But unlike some countries where artists are more respected and have access to more resources thanks to artist cards, the Moroccan artists cannot use theirs to get reasonable prices on airfares, participate in international cultural events , or to receive facilitations on visas.

We have seen the criticism by a group of Moroccan artists on the internet for the limited role of this card in Morocco–it doesn’t give the Moroccan artist a more material or moral incentive.

Tell us about your future projects.

Mustapha Slameur: In the future I intend to release new album, complete my planned performances in a group of countries, and create a slam training workshop by the beginning of next year. I am working on a book about the Moroccan slam and also preparing a national championship for the art of slam and spoken word. There is also an exclusive project in the Arab world, a documentary to introduce the art of slam to the Arab world. We have just finished filming, and we will announce it soon. Furthermore, there is also a project for slam in the street and in particularly in the public transport (Tram in particular) ­– we called it Slam F’tram – in order to enable artists to create a positive atmosphere among our community and a link between the ordinary citizen and the artist, like in all the capitals of the world. I hope that our project won’t be reject by the authorities. But my biggest dream remains ton invite the founder of the art of slam, Marc Smith, to Morocco to meet all the practitioners and the Moroccan public.